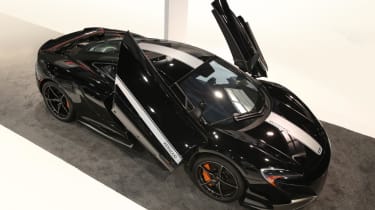 Electronics firm JVC Kenwood has been associated with McLaren for quarter of a century, a partnership perhaps best known for its work to produce an ultra-light audio system to meet Gordon Murray’s strict specifications for the McLaren F1.

At the Consumer Electronics Show in Las Vegas, JVC Kenwood and McLaren present another collaboration, streamlining the technology of the McLaren 675LT.

The 675LT isn’t exactly a car over-encumbered with technology, largely limited to the IRIS infotainment system and devices to help you negotiate a circuit at ludicrous velocities, but JVC Kenwood has taken the minimalism a step further.

IRIS is gone, for a start, as is the rest of the centre console. With air conditioning a delete option on the 675LT, JVC Kenwood has been able to remove the console that houses its controls. The result is greater interior space, while a dashboard re-trim in Nappa leather and a technical fabric ensures the cabin still meets the quality standards of the regular car.

Using a steering wheel from the McLaren P1 GTR has made up for any switches you might otherwise have missed, also allowing the technology firm to delete the 675LT’s standard instrument display. 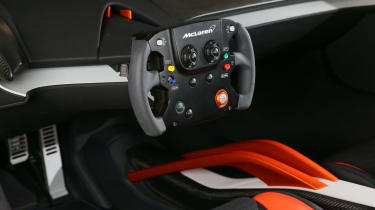 Taking its place is carbonfibre-framed vent for direct ventilation, while its functions are replaced by a head-up display in the driver’s field of view. The GTR’s IPAS and DRS buttons are replaced by controls to position the HUD.

Digital cameras – something of a theme at CES – replace the 675LT’s regular wing mirrors. This reduces drag, and JVC Kenwood also claims it aids downforce at high speed (a reduction in lift seems more likely).

The rear mirror too is replaced by a camera-based system, dubbed DVRM (Digital Rear View Monitor) – three cameras provide a much wider field of view than is possible with a conventional mirror, also eliminating the massive blind spots associated with supercars.

The 675LT’s exterior has remained unchanged (mirrors aside), but subtle orange details hint at the colour scheme featured inside. The seat bolsters, cockpit sides, air vent and an anodised element around the start button are all picked out in orange. Other details, including the centre console, dashboard insert and exterior stripes, are silver.