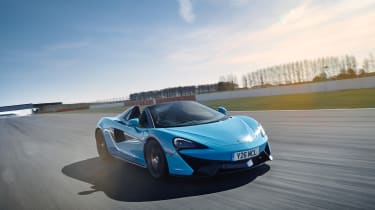 McLaren has announced it is to offer the Track Pack, consisting of a selection of lightened and track-orientated options, on the 570S Spider for the first time. Available to option on all new-order 570S Spiders from now, this new option pack should appeal to those considering taking their drop-top supercar on the track.

Lightening the overall package by 33kg, the Track Pack will offer the same features, including a sports exhaust, lightweight forged alloy wheels shod in Pirelli P Zero Corsa tyres as the hardtop 570S.

> Click here for our review of the McLaren 570S Track Pack

The Track Pack has proved to be a popular choice for 570S buyers, and thanks to the inherent advantages of its carbon tub construction, the Spider should drive with as much delicacy and precision as the hard-top.

Mechanically, the Track Pack doesn’t add any numerical upgrades in terms of power or torque, but with 563bhp and a lithe kerb weight compared to chubby soft-top rivals, the Spider’s performance is already more than acceptable.

At a little over £17k, the Track Pack also represents relatively good value, as optioned together, all of these components would add up to more. Expect to see 570S Spiders fitted with the Track Pack slithering around race tracks later in the year.