How different is McLaren's road-car philosophy today compared with two decades ago? John Simister compares the F1 with the company's new supercar to find out 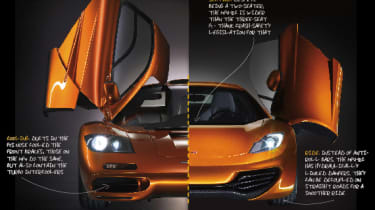 Purity turns to pragmatism. With McLaren’s MP4-12C now revealed in all its orange sleekness, it’s a good time to compare it with the car that inspired it, the McLaren F1. Can it really be 20 years since the F1 was conceived, and 16 years since it proved itself the fastest road car on the planet? The Bugatti Veyron and others have since trumped the F1’s 240.1mph top speed, but none has combined the searing pace with such lightness and purity.

Cost-no-object perfection, combined with the clearest possible car-driver interface, formed the mindset behind the F1. The new supercar comes into a different, more regulated world, and it has been conceived as a full-scale commercial venture rather than a kind of automotive artwork. The much lower price – around £150,000 rather than the £635,000 the F1 cost new – means a much wider customer base, so more tastes have to be accommodated. Paradoxically this has created a car with more technology, not less. The challenge will be for the MP4-12C, despite the many more variables in its make-up, still to be a driving machine worthy of its ancestry.

So what, if anything, do the two McLarens have in common? Let’s take a look…Concept

Powerful mid-mounted engine, carbonfibre monocoque, minimal aerodynamic distractions apart from a retractable rear spoiler/airbrake. Those are the obvious commonalities, along with compactness and low weight. But cars are bigger than they used to be, and that’s true even at McLaren. The F1 is 4288mm long, 1820mm wide, has a 2718mm wheelbase and weighs 1140kg. The MP4-12C is 219mm longer and 75mm wider, with a 48mm shorter wheelbase, and weighs another 200kg. Yet its carbonfibre tub weighs just 80kg.

Both are built around a carbonfibre core, but the execution is very different. McLaren made the first carbonfibre Formula 1 car (the MP4/1 in 1981), so it’s something of a brand signifier, and the F1 was quite, well, F1-like in its construction with the suspension mountings fixed directly into the carbonfibre tub. The MP4-12C does it differently: its tub ends at the front and rear bulkheads, and aluminium frames carry the engine and suspension and form the collapsible crash structures.

The carbonfibre construction process has come a long way, too. The F1’s structure used hand-laid, resin-impregnated sheets, a labour-intensive process that took 3000 hours by the time the structure had been baked and finished. The Mercedes SLR McLaren did better, requiring 400 hours for its six sections thanks to resin injection-moulding processes, but the MP4-12C’s single-piece ‘MonoCell’ structure takes just four hours to make. That it contains hollow sections is a revolution in carbonfibre moulding. It’s massively strong, too; the same prototype tub was used for three separate crash tests without damage.

Lightness is key, of course, even for today’s equipment-demanding and safety-expecting customers, so there’s plenty of magnesium in the MP4-12C. One piece of the ultra-light metal forms the dashboard’s support beam. It bears a McLaren logo, initially embossed when development began. But that meant an excess of protuberant metal, so the letters were recessed instead, saving 2.4 grams. The heat-reflective gold film in the F1’s engine bay has not been reprised on the MP4-12C, however.

Both mid-engined McLaren supercars have bespoke engines, but one is more bespoke than the other. BMW Motorsport created an incendiary V12 specifically for the F1, a 6064cc unit designated S70/2. Power was 627bhp at 7500rpm, torque 479lb ft from 4000 to 7000rpm. It had dry-sump lubrication, variable inlet-cam timing and, crucially, no turbocharging. Designer Gordon Murray preferred the idea of a larger, normally aspirated engine because the prodigious power output would be easier to meter.

For the MP4-12C, though, McLaren could not find a suitable production engine to use as a starting point, chiefly because of the modifications needed to use, again, a dry-sump system. So the company has designed its own, designated M838T: a 3.8-litre V8 with two turbochargers. These turbos and the Ferrari-like flat-plane crankshaft ensure the MP4-12C doesn’t sound like a regular V8. But neither does it scream: instead it emits a deep, crisp throb, less staccato than, say, an SLR’s sound, but very rich.

Power is 592bhp at 7000rpm, torque is 442lb ft beginning at 3000rpm, so the MP4’s power-to-weight ratio is well short of the F1’s. That’s reflected in the top speed of ‘just’ 200mph, but both cars get to 120mph in just under 10 seconds. The MP4-12C has variable timing on all four camshafts. This and the ‘imperceptible’ turbo lag help create a very quick throttle response, McLaren claims.

Six-speed Weismann transversely mounted manual for the F1, to give maximum driver interaction – besides which, sequential gearboxes were almost unknown for road cars in 1992. Supercar buyers now expect a sequential ’box so the MP4-12C has the company’s own double-clutch, seven-speed, ultra-compact ‘SSG’ – Seamless Shift Gearbox. It includes a ‘pre-cog’ function on the paddles, alluding both to pre-cognition of driver’s intent and pre-priming of the clutch controlling the next gear or ‘cog’. A light pressure on the paddle triggers this function, so the shift is faster when it is then commanded by a firmer paddle-pull. No other sequential system keeps the driver in touch with the process like this one, reckons McLaren.Suspension, brakes

Both cars are designed to blend crisp, predictable, ultra-agile handling with a properly supple ride, so both use wishbone bushes with lots of longitudinal but little lateral compliance. After this they diverge radically. So strong is the F1’s purist streak that it lacks power steering and anti-lock brakes, never mind anything of greater electronic complexity. That’s as it should be for its time, but tastes – like it or not – have changed and electronics have massively improved.

So the MP4-12C gets electro-hydraulic steering and the full gamut of ESP/ABS/ASR/ABD and even a hill-holding device. A Brake Steer system brakes the inside rear wheel as needed to help turn-in, and the dampers are adaptive. The responses of the suspension, and separately the engine and transmission, can all be tailored with Normal/Sport/Track settings. All of this is designed to increase driver involvement, not reduce it, by making the new McLaren do as closely as possible what its driver wants it to do.

McLaren made 64 road-going production F1s; add the five prototypes and the various LM, GT and GTR racers and we reach 106 cars. The MP4-12C is in a different numbers league, with 1000 cars planned for the first year of production (2011) alone and full profitability expected within four years. There’ll soon be a shiny, spotless new production plant on McLaren’s Woking estate and a worldwide network of high-end dealers.

The 12C might not become the instant legend that its ancestor did. Instead it will most likely prove to be simply a fantastic supercar of a more accessible sort. Which means a few more of us will get to drive one, and that is excellent news.