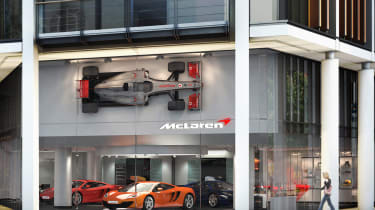 McLaren has given more details of its first UK showroom, set to open its doors later this month on London’s Hyde Park Lane. The company plans to open a further 35 showrooms in 19 countries by the end of the year.

While servicing of the iconic McLaren F1 will continue at McLaren headquarters in Woking, the London showroom located at One Hyde Park, will be the first point of contact for sales and service of the MP4-12C and the other models that the company will soon be adding to the line-up.

McLaren is planning to offer what it describes as ‘pit stop’ servicing for owners of the MP4-12C, with dealers stocking at least one of every serviceable component to avoid having to wait for parts – a common experience for most supercar owners.

The London showroom opens on June 21st, and showrooms in Manchester and Birmingham will also be opened in time for the customer launch of the 12C later this year. The company says it will have 32 showrooms around the world by the end of the year, with the dealership network set to grow further as the company moves towards its ultimate goal of producing 4000 cars a year by the middle of the decade.