US tuning firm Hennessey Performance has worked its magic on the MP4-12C, with a host of performance upgrades 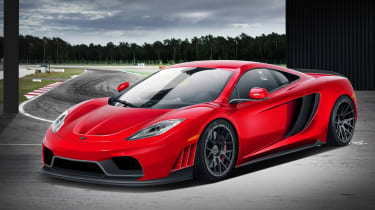 John Hennessey of Hennessey Performance (HPE), the Texas-based supercar tuning company, has announced a range of upgrades for the McLaren MP4-12C, which will take power up to over 800bhp. Hennessey has named it the HPE800 Twin Turbo, and it features a bigger air-intake, intercooler system and improved turbochargers, with a custom-built titanium exhaust.

The aerodynamic package developed by Hennessey is primarily designed to increase downforce, but the larger front air-intake also serves to supplement the improved radiators and intercoolers that are fitted. There will be absolutely no upgrades to the suspension or brakes, as HPE claims that it would be extremely difficult to improve on the factory equipped systems.

'We've been taking fast cars and have been making them faster for over twenty years,' said company founder and president John Hennessey. 'I spent a lot of time around the new 12C at the 2011 Goodwood Festival of Speed and was very impressed. We're excited to have the opportunity to take a great car and give it our own special performance touch while giving 12C owners a uniquely aggressive appearance.'