A number of software upgrades have been released for the MP4-12C, increasing power by 25bhp and improving shift times 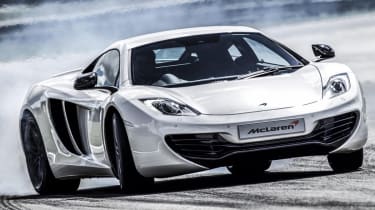 McLaren will roll out a number of changes to the MP4-12C from October. They see power from the twin-turbo V8 increase by 25bhp to 616bhp, as well as quicker shift times and a number of detail changes, prompted by customer feedback – most of which can be retrofitted to existing McLarens.

This is the first major upgrade for the UK supercar, and although cosmetically nothing has changed (other than the badge), engineers at McLaren have managed to squeeze an extra 25bhp from the engine, while keeping the already impressive 279g/km CO2 figure identical. The 0-62mph time remains the same, but top speed has increased to 207mph - up from 205mph. This is all down to a software update, which will be installed on all existing cars by McLaren for no cost.

McLaren has also made a few changes to its SSG gearbox system, which now shifts faster and is said to improve throttle response and clutch control during gear changes. This is joined by an improvement to the car’s ISG system, which feeds engine noise into the cabin. There is now more adjustment, so the driver can pipe in more sound when in sport of track mode.

Another useful feature that has been added is the ability to raise the ground clearance by up to 40mm at the front, in a similar to the fashion to the Lamborghini Murcielago, perfect for clearing bumpy driveways. This system cannot be retrofitted however, and is only available to new McLaren customers.