McLaren is unveiling an updated MP4-12C and will be running F1 cars up the hill climb. 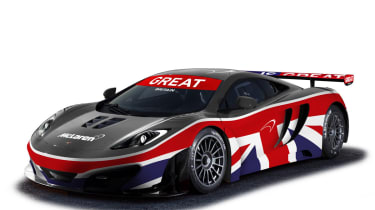 McLaren will be out in force at Goodwood this weekend, debuting its updated MP4-12C as well as sending the 2011-season F1 cars up the hill.

Jenson Button will be driving the production prototype of the revised MP4-12C on Saturday, before he and teammate Lewis Hamilton jump into last year's F1 cars and pilot those up the hill too.

The updated MP4-12C boasts an extra 25bhp, bringing the power up to 616bhp, with a corresponding increase in the top speed of 2mph. The 0-62mph time however, remains the same at 3.3secs. The increase in power has been achieved by applying a software update, which will be installed free of charge on all existing cars by McLaren.

Revisions have also been made to the SSG gearbox, making changes quicker and improvements to the throttle response and clutch control during gear changes.

On top of that, McLaren will be showing off a newly liveried GT3 12C, decked out in a striking Union Flag design. The livery has been applied to show McLaren's support for the Government's 'GREAT' campaign - the aim of which is to 're-affirm Britain’s international reputation.' It will be driving up the hill on Friday, Saturday and Sunday.