McLaren has confirmed that it will produce 30 Can-Am edition 12C track cars. 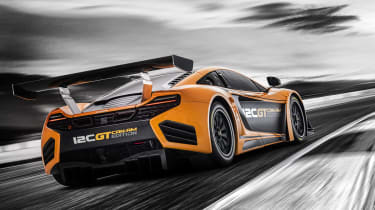 Following the one-off design study that was revealed earlier in the year, McLaren has announced that it plans to launch the ultimate track version of 12C, the Can-Am special edition. The Can-Am is an evolution of the GT3 race car, with 621bhp and 30 percent more downforce.

Under the skin, the racing car features the same carbon fibre monocoque as the 12C road car, and with all the upgrades, the total dry weight comes in at just 1200kg.

A new aerodynamic package includes a carbon fibre front splitter, carbon fibre dive planes, and a carbon fibre wing, said to increase downforce by 30 percent over GT3-spec racer. This is largely due to the fact it isn’t adhering to any current race regulations.

The extra power comes from a revised version of the standard 3.8-litre twin-turbo V8, which due to not having any restrictions, is producing a healthy 621bhp – making this the most powerful 12C variant yet.

The Can-Am is finished in McLaren Orange, as a tribute to the cars of Bruce McLaren and Denny Hulme, who made McLaren such a big name in the USA during the 1960s and ‘70s.

Production will be limited to just 30 units worldwide, with the basic package coming in at £375,000, although buyers will be able to benefit from bespoke support packages from McLaren GT.