McLaren has released images and video of the new P1 hypercar testing on track as it gears up for launch. 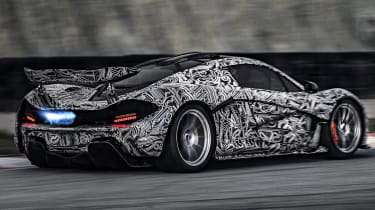 McLaren has releaed new images of it's P1 hypercar, that show it in a new XP camouflage, during circuit testing. After being unveiled at the Paris motor show in 2012, the company designated the show car as a pure design study, which could still change before making production. An updated car, perhaps even production ready, is expected to make its next public appearance at the Geneva motor show in March.

While not officially confirmed, the P1 is still expected to use a heavily revised version of the 12C’s 3.8-litre twin-turbo V8 engine, delivering around 750bhp. That’s not all, though; it’ll be complemented by a Formula 1-style KERS electric motor, which will operate through the dual-clutch gearbox and boost the total power output to around 850bhp.

Much under the skin will be related to the 12C, including the ‘ProActive Chassis Control’ suspension set-up and the carbon tub. McLaren says the MonoCage structure is a development of the 12Cs MonoCell structure, so the P1 will be similar in dimensions to the 12C, but it’s fair to say it possesses far more presence.

It’s a wild looking car, and one that will make a bold statement in the hypercar class. Styling highlights include McLaren logos in the headlights, wildly sculptured doors and a hugely aggressive rear end. It’s also very easy to spot where aerodynamics have played their part in the P1’s looks.

Further details – including its powertrain and other technical information – are expected to be announced at the Geneva show, with sales begining shortly after, with a price tag of around £800,000 expected. Deliveries are due to commence later this year.