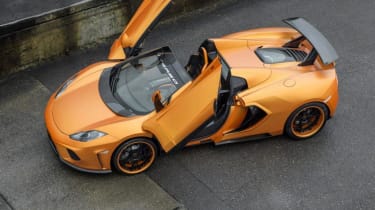 McLaren 12C Spider a little too introvert for you? FAB Design has unveiled its new Terso, a modified Mac that debuted in MP4-12C coupe form, and can now be bought as a drop-top 12C. It doesn’t take an in-depth knowledge of Woking-built supercars to notice the exterior has had a makeover. The bumpers, side skirts, air intakes and rear diffuser are all way more aggressive, while the active rear spoiler gains an incredibly bold fixed (yet adjustable) neighbour. The overall look of the car’s rear end is notably different to a standard McLaren 12C Spider; for better or worse is up to you. The Terso’s styling is rounded off with a set of 20in forged alloy wheels. The changes are more than skin-deep, too. A stainless steel exhaust system is partly responsible for a hike in power, the 3.8-litre twin-turbo V8’s outputs rising from 616bhp and 442lb ft to 680bhp and 527lb ft. FAB claims it’s enough to cut the 0-62mph time from 3.1 to 3 seconds dead, while the top speed climbs from 207 to 213mph. FAB Design will make just ten Tersos, with each one customisable to the buyer’s tastes. Expect a sizeable rise over the standard McLaren 12C Spider’s £195,500 price tag.  FAB is usually one of the bolder tuning companies displaying its wares at the Geneva motor show, and this year is likely to see the Terso take centre stage on its stand.