McLaren has created some of the most stunning road and racing cars since it was founded 50 years ago. Which is your favourite? 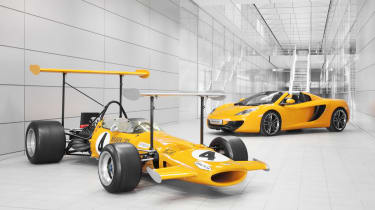 McLaren is celebrating its 50th anniversary this year, and since New Zealand-born racing driver Bruce McLaren founded his very own racing team in 1963 – the racing team has gone from strength-to-strength, winning over 182 races, 8 constructors’ and 12 drivers’ championships. Bruce McLaren.

McLaren Automotive, the road car arm of the company, was actually founded back in 1989 by company director Ron Dennis. The main goal was to create road cars using the latest Formula 1 technology. With the introduction of the McLaren F1 in 1992, the company succeeded in spectacular style.

This video was produced by McLaren to pay tribute to the company’s founder, who died racing at Goodwood in 1970. This is the first of three McLaren 50th videos – the next two parts will be released later in the year.