Video reports on our McLaren 12C long-term test car. As fun as a Ferrari 458 Italia? 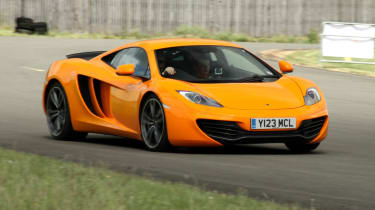 We have our own McLaren 12C, a bright orange long-term test car lent to us for nine months by Woking's most famous (well, only) supercar maker. The 12C (originally named the McLaren MP4-12C) is a bona fide supercar to rival the Ferrari 458 Italia and Porsche 911 Turbo S, but the fact that it introduces a new technical philosophy to the rarefied world of supercars will make it a fascinating everyday companion.

The spec? Well our car’s paint is the glorious, almost-luminous McLaren Orange that immediately conjures images of Bruce and Denny manhandling M8s, while the ‘Stealth Pack’ introduces black detailing. The wheels have been upgraded to MY13 diamond-cut lightweight forged items (and are bloody lovely), and there are carbon-ceramic brakes, too.

Inside, there’s Alcantara trim on the dash, and orange stitching on the carbon black seats, carbon wheel and centre console trim. The delayed IRIS satnav/media system is fitted, as is a Meridian sound system. Parking sensors and a tyre-pressure warning system complete the spec.

While our car is actually a used example from McLaren’s ‘Qualified’ scheme (no shortage of Formula 1 nods at a company like this), its mid-mounted twin-turbo V8 engine has been upgraded to 2013-spec, which means a 24bhp boost from 592bhp to 616. The gear paddles are now said to be more responsive to touch, and McLaren’s ‘Intake Sound Generator’ (ISG) is fitted, a system which controls the level of engine intake roar you can hear in the cabin. ISG is programmable in any of the three powertrain modes, so you can choose the most extreme ‘Track’ chassis mode but retain the quietest intake noise, for example. The 2013 12C’s top speed is quoted as 207mph, while 0-60 takes 3.1sec.
Advertisement
Advertisement - Article continues below
So there you have it. We’ve got six months with a 12C to perhaps bond with it in a way we’ve struggled to thus far. It’ll be a fascinating experience, and we can see how we’re getting along via the videos below. The newest is above, with previous episodes below.
Follow us on TwitterFollow us on FacebookEmail us
Advertisement
Advertisement