McLaren 650S teased ahead of Geneva

McLaren has teased a new model, called the 650S, ahead of its Geneva show reveal. Details here 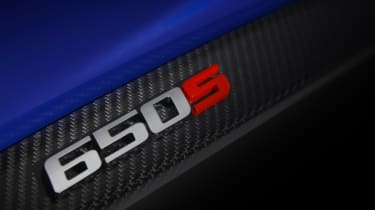 In the run up to the 84th Geneva Motor Show, McLaren has announced that it will be unveiling its third supercar, the 650S. Sitting above the MP4-12C and below the P1, the new car will utilise the same carbon-tub and twin-turbo V8, albeit tuned to sit in the middle of the range.

Essentially the 650S will be based on the current 12C, but it is expected to feature aerodynamic and styling cues from the downforce-laden P1. Its name suggests the 3.8-litre engine will produce 650PS (641bhp) - an increase of 25bhp from the 12C - whilst a carbon-fibre dominated teaser picture hints at a focus on weight saving.

Performance will no doubt improve on the 12C, with a 0-62 time of about 3 seconds and top speed of over 200mph anticipated. The car’s chassis is also expected to be more dynamic than the standard 12C, with the Woking supercar makers targeting Ferrari’s excitable 458 Speciale as a main rival. With this in mind, the 650S is likely to cost around £200,000, about £20,000 more than the 12C but less than the £208,000 Ferrari.

The launch of McLaren’s 650S signals the first of three new cars to be built at McLaren’s Production Centre, with an entry-level P13 and mid-level P15 set to follow in coming years. These cars will also be designed around the MonoCell carbon-tub and 3.8-litre V8, meaning the British marque will offer a full range of cars based on the same underpinnings, something unheard of in a production supercar firm.