McLaren has announced a track-only 650S Sprint model, which will be unveiled at the Pebble Beach Concours. Prices, specs and pictures here 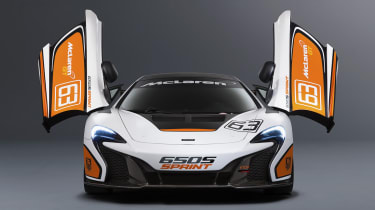 McLaren GT has confirmed it will be unveiling the track only 650S Sprint at Pebble Beach Concours d'Elegance this month. The GT racing arm of the McLaren Group has developed the Sprint as a slightly less hard-edged version of the 650S GT3 racer, modifying the 641bhp 650S road car to suit the harsh environments of the race track without compromising too heavily on drivability.

Given that many drivers of this car will be amateur racers, McLaren GT worked hard to ensure the refinement and balance of the road car was retained. To do this engineers developed the Brake Steer system, a system that independently brakes wheels to aid traction and cornering, and fine tuned the ProActive Chassis Control - allowing the driver to adjust the car’s response to roll - to work more effectively in a race environment. The suspension settings were also recalibrated, pulling the 650S Sprint closer to the ground with a stiffer and more purposeful track focused setup.

The active aero has also received updates, increasing downforce with the addition of an optional carbonfibre rear wing and front splitter. Cooling intakes have grown to ensure the 3.8-litre twin turbo V8 runs at optimum temperature through fast race stints, whilst a larger GT3 front radiator and radiator exit ducts help to more effectively channel cool air through the car.

The engine itself has only undergone some light fettling to see calibration between itself and the gearbox match more effectively for track use, though with some 641bhp and 500lb ft of torque - enough to shove the heavier road car from 0-60 in just 3.0secs - that should suffice for most.

To meet race requirements, the car's carbonfibre monocoque is strengthened further with a roll cage and features a carbonfibre HANS approved race seat with six-point harnesses, whilst air conditioning is retained for comfort. Other areas to see motorsport preparation include the fuel ‘bag’ tank with quick-fill connectors, centre-locking 19inch racing wheels wrapped in Pirelli slick/wet rubber, a race prepared braking system and an onboard air jacking system for fast paced pitstops.

The track focused Sprint is wrapped in a livery that inverts the colours seen on the GT3, with the more hardcore racer’s Tarocco Orange adding highlights to the Sprint instead of forming the base colour.

Joining the new car at Pebble Beach will be a host of other McLarens, though the one expected to grab most attention will be the race spec 986bhp P1 GTR, worth an eye watering £1.98million. Thankfully the McLaren 650S Sprint will start at just £198,000, some £2,750 more than the base road going 650S, and will be available from all official McLaren retailers worldwide.