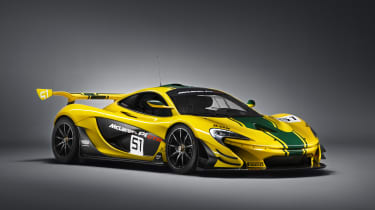 At first glance the P1 GTR’s gains seem to be surprisingly small compared to a ‘standard’ P1 road car.

Weight is only down by 50kg to 1345kg (compared to a LaFerrari’s 1255kg – both measured dry). Similarly, downforce is up by just ten per cent or an extra 60kg at 150mph despite the huge fixed rear wing.

Even the power increase from 903bhp to 986bhp seems a little slim. Surely it could have been nudged into the four-digit bracket? (And, yes, I know that 986bhp is equivalent to 1000PS, but frankly McLaren is a British company and so bhp not PS should be the yardstick).

However, I suspect that the GTR experience will be a car where the aggregation of marginal gains (to borrow a phrase from Sir David Brailsford) means it is a significantly different experience to the road car.

Slicks will probably make the biggest difference. When we drove the P1 around Anglesey last summer the tyres seemed to be the limiting factor of the car. On P Zero Corsas the P1 simply didn’t seem able to utilise all of its aero ability through the faster corners, the tyres not able to cash the cheques that the aero was writing. P Zero Trofeo R tyres improved things but the GTR’s Pirelli slicks should be an even greater leap on and enable the P1 to showcase all of its true cornering potential. 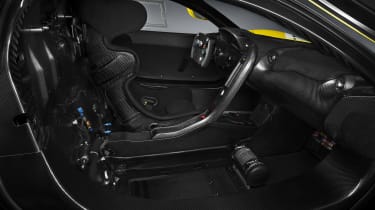 Something else that will likely alter the feel of the P1 GTR is the 80mm wider front track (it is very noticeable the difference that the wider front track of an RS makes compares to a standard 997.2 GT3). Just sitting in the car will feel quite different too, I imagine. The cockpit of the P1 is already quite a snug place (more so than a 12C or 650S), and the deletion of the glass roof panels, which cleverly give it a reasonably airy feeling, could mean you’re left with quite a dark and intimidating driving environment.

Finally, the thing that the lucky owners will have to give most thought to when they order their GTR is what colour scheme to have it painted in. The show car has obviously taken inspiration from the Harrods liveried race car, but the Fina or Lark liveries could also be good starting points.

Equally something more subtle could look great – like a matt black car based on the Ueno Clinic and Loctite liveries. Personally, I think I’d have to go with straight up McLaren Orange or the wonderful Yacco Alien Art Car livery designed by Cesar Baldaccini for GTR5, which raced at Le Mans in 1995.