Much improved A-class is still no hot hatch 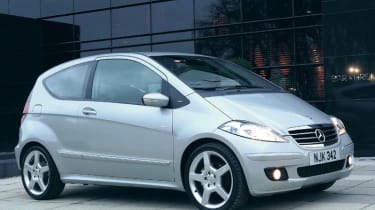 Elk, moose, deer, even the humble Fresian cow shouldn't hold any worries for the second incarnation of Mercedes' Tardis. Where the old A-class infamously went sump-over-grab-handle trying to evade cones representing wandering Scandinavian ruminants, the new one merely wafts around them, which translates to a much more enjoyable car, for us as well as them.

We tried the most powerful diesel and petrol versions currently available (there's a 200bhp turbocharged 2-litre petrol due at the end of the year) and it's nice to be able to sing the praises of the latter rather than the former. The petrol comes with only five gears to the derv's six, and 136bhp versus 140bhp, but it feels much the more flexible and gutsy unit, punting along at a brisk yet refined pace with decent urge when you want it at motorway speeds.

Although the driving position is high, you don't get the waving sensation of being at the top of a tree in a gale through the corners. The driving position is also less van-like, and the rest of the interior is as spacious as Mercedes claims, although whether it's what you'd expect for the £26K of our specced-up test car is debatable. The £500 optional Harman Kardon stereo was, however, fantastic. As far as the outside goes, you can make up your own mind, but it does seem odd that when form so obviously follows function, anyone would bother to specify the convenience-robbing three-door.

In everyday driving the A-class is refreshingly accomplished, with a good ride/handling trade-off. It's best through bigger corners on more open A- and B-roads where you can use the laterally stable chassis to best effect. The wide-feeling front track doesn't really key into the tarmac through tighter, more nadgety turns and the outside front wheel always seems to be trying to bear too much of the cornering duties. A touch of trail-braking does help, but few owners will drive it like that.

In truth, you wouldn't really expect an A-class to be some B-road hero anyway. Much better to enjoy sweeping along bigger roads, cheerfully waving at all the animals as you go.