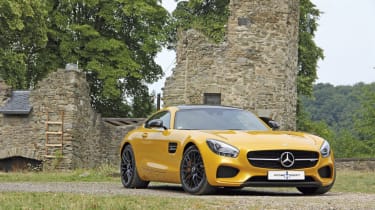 You could say that the Mercedes-AMG GT S’s standout feature is its deep bellowing V8. That’s not to say the chassis is lacking, but the twin-turbo unit was certainly a key ingredient in securing victory against the Porsche 911 Carrera GTS in the car's first head-to-head test (evo 204). And now, thanks to German tuning house Posaidon, that V8 is available with substantially more firepower.

Swapping the standard inboard turbos for uprated items, increasing the size of the intercooler and fitting a freer-flowing exhaust system has enabled Posaidon to fine-tune the ECU’s mapping so the engine now produces 690bhp and 553lb ft of torque. 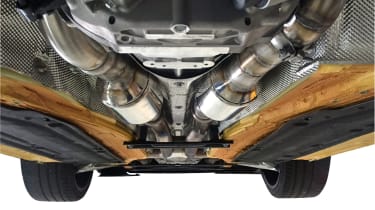 This represents a substantial increase of 187bhp and 74lb ft of torque over the standard car, and ensures the Posaidon GT S shaves six tenths from the factory model’s claimed 3.8sec 0-62mph time. Top speed also grows to 216mph, 24mph more than standard, ensuring the car now has enough grunt to out-drag a Lamborghini Huracan.

Posaidon says that it could have upped torque even further, but it chose to cap the number at Mercedes’s recommended torque limit in order to ensure the mechanically unmodified seven-speed dual clutch gearbox remains reliable – though admittedly, Posaidon does offer a ‘box remap and will, if provided with a written request to do so, up torque beyond the recommended limit. 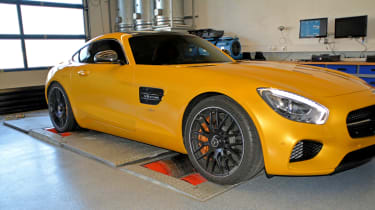 Interestingly, owners of the non-S AMG GT can also be catered for, because Posaidon’s engine performance upgrades are also available on its less potent V8 – in this case the car’s final output would represent a 234bhp and 111lb ft of torque over standard. It’s worth noting that the GT doesn’t receive the S’s electronic LSD however, instead making do with a mechanical system – so Posaidon tuned GT owners might find that this output increase requires gentler throttle applications…

So what’s the price of all of this engine work? Posaidon says that it’ll supply and fit all of the parts for €25,000 (this price includes Germany’s 19 per cent sales tax). While that might initially sound like a lot, let us not forget that a Posaidon AMG GT S’s output would rank it alongside the likes of the Lamborghini Huracan – and that car starts at £186,760.