Full gallery and details of the new drop-top AMG GT 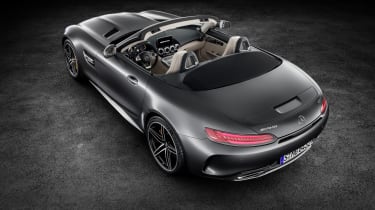 Mercedes-AMG has published images and details of its all new AMG GT Roadster. The car will exist in two forms, firstly as the entry-level AMG GT Roadster and then as the more powerful AMG GT C Roadster. Both mirroring the spec changes found on the coupe AMG GT and GT S.

This means 469bhp for the AMG GT Roadster and 547bhp for the GT C, both of which are actually slightly higher than the Coupe's stats due to the Roadster's added weight. Other changes, aside from the obvious new convertible roof, include the revised grille, which is similar to that of the AMG GT R. 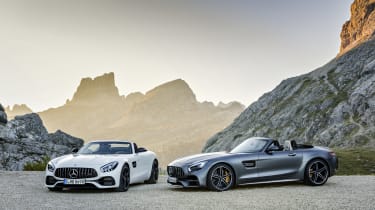 In fact, multiple design changes and features have been adopted from the GT R for the Roadster. The drop-top gains the R's active air management system which uses opening and closing ducting within the grille to help with cooling or smooth out airflow.

Then there's changes to the rear of the GT C, which unlike the standard Roadster, will use the 57mm wider bodywork of the R and thus run wider tyres. 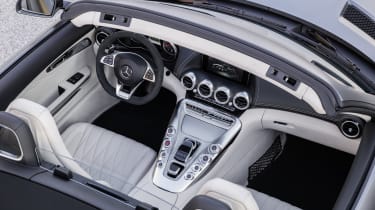 The GT Roadster also has slightly altered gear ratios over the coupe. It has a higher first and lower seventh gear with a longer final drive. The AMG GT S's 'race' mode is retained for the AMG GT C, while the optional Ride Control suspension also remains.

As for the roof itself, it's a fabric item that uses a three-layer structure mounted on aluminium, magnesium and steel. Closing is said to take 11 seconds and it can be optioned in either black, red or beige.

Pricing for the AMG GT Roadster and GT C Roadster is still to be revealed. Expect more details at the Paris Motor show.