What on earth is it? We think we've got the answer 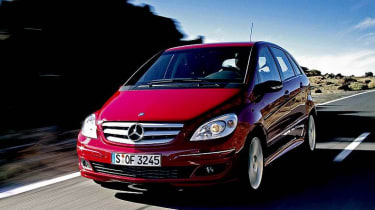 It's so that people can move from A to B; that's why Mercedes made it. It took us a while to work it out, though. There was some earnest bonce-scratching when the new B-class arrived in the car park at Evo Towers. No-one could quite fathom what it was. A very expensive Renault Scenic perhaps? Or an estate for short people? With a 2-litre petrol turbo, 193bhp and a six-speed 'box, it could even have been a sort of big hot hatch. But none of these seemed quite right. It looks good - all wide yet compact, and it attracts plenty of attention. Climb inside and it's Mercedes business as usual with a pleasingly classy ambience. However, it's clear that if you combine that chunky design with a higher than average seating position then something has to give and in the B-class it's headroom. Despite the badge on the back, its speed still causes a raise of the eyebrows. The 0-62mph time feels easily do-able, torque-steer-free traction is excellent and the turbo-enhanced mid-range means that overtaking is easy. Although it isn't a hot hatch, if you find yourself on a good road then it will certainly let you enjoy it, up to a point. You get on the throttle as early as possible in a corner, working the front end's grip through fast sweeps. It's quite stiffly suspended laterally too, but the rear doesn't want to play at all and the very light steering means that there's less fun to be had on tight and bumpy B-roads. And that's when I realise that it's just like the other high-floored, front-wheel-drive model from Mercedes. The new B-class is for people who want an A-class, but who want it just a little bit bigger.