Which is faster in a drag race: the Mercedes C63 AMG Coupe or Shelby GT500 Ford Mustang? 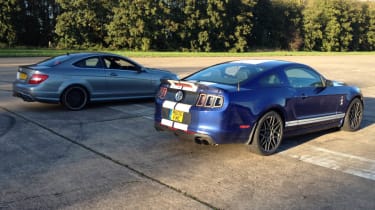 3
These two may look an unlikely pair photographed together, and on paper, Mercedes C63 AMG Coupe versus Ford Shelby GT500 seems equally odd. The German car's 451bhp and 442lb ft are dwarfed by the American's faintly ridiculous 662bhp and 631lb ft. So despite the Mustang's bulk, its claimed performance makes it top dog, completing 0-60mph nearly a second quicker (3.5sec plays 4.4) and its 202mph top speed embarrassing the 175mph Merc.
They're only claimed figures, though, so we took the two most muscular ways to spend fifty-odd thousand pounds to Bruntingthorpe and its two-mile runway for a good old fashioned drag race. You can see which car is victorious in the video below...