The C-class Coupe has its strengths, but driving dynamics are not among them 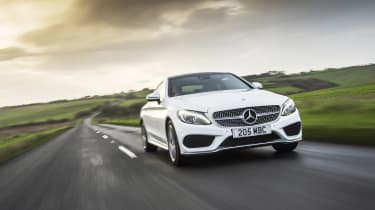 The C250d isn’t the most eye-catching model in a C-class Coupe line-up that includes the monstrous 503bhp AMG C63 S, but with a relatively frugal four-cylinder diesel engine it will be one of the biggest sellers.

The AMG Line version, tested here, gets a lower ride height and slightly sportier styling treatment than the base model, but with none of the aggression or swollen-arch muscle of the full-blown C63. In fact, AMG Line or not the C250d looks anaemic from the rear.

The four-cylinder turbodiesel, displacing 2143cc, develops 201bhp and 369lb ft of torque. Peak torque is available from just 1600rpm, which isn’t much higher than idle. Drive goes to the rear wheels through a nine-speed automatic gearbox – Mercedes’ latest self-shifting transmission.

The 0-62mph time in quoted as 6.7 seconds and the top speed as 153mph. According to Mercedes the C250d should return 61mpg on the combined cycle, but during our time in the car we managed closer to 45mpg in mixed driving. 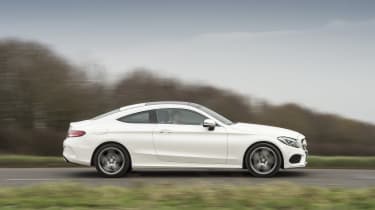 The item that most stands out on the C250d’s spec sheet is the 9G-Tronic automatic gearbox. With two extra ratios compared to the earlier 7G-Tronic transmission the new ‘box is designed to reduce fuel consumption – partly through a very long ninth ratio that keeps engine speeds down on the motorway.

Gearbox aside, the C250d also features Mercedes’ Dynamic Select switch. It allows the driver to shuffle through various modes, from Eco to Sport Plus, adapting parameters like steering weight and gearbox shift strategy. There’s also a customizable Individual mode.

The C250d’s main selling point is its cabin. The interior design mixes modern aesthetics with a handful of classical touches, the result being a stylish and attractive cabin that feels as though it’s been borrowed from a much more expensive car. The quality of materials and build backs up that impression. The seating position is good, too, and the infotainment system is intuitive to navigate.

At idle, however, the four-cylinder diesel is very clattery, and although that does improve as the engine warms through the noise from the 2.1-litre unit is always intrusive under hard acceleration. This is certainly not a whisper-quiet diesel engine.

Nor does it feel like a torque-monster, despite the huge figure of 369lb ft. Instead, straight-line performance is no better than adequate for a car with a near £40,000 list price – the lower powered 220d version must feel hopelessly gutless. The stop/start system, meanwhile, is far too eager to kill the engine, doing so even during parking manoeuvres. 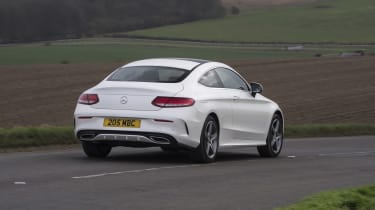 On a more positive note the nine-speed gearbox is smooth and refined, and it doesn’t hunt between ratios as much as you might imagine.

With the lowered suspension that comes as part of the AMG Line package there is a slight edge to the C250d’s ride quality, but it’s far from enough to make the car feel uncomfortable or unsettled. With speed the car does float along quite fluidly and on the motorway wind, road and engine noise are well subdued.

If the two-door body shape and ‘sports suspension’ suggest to you a heightened level of dynamic ability, think again. Through reasonable body control and decent grip the C250d can be hustled down a road at good speed, but there just isn’t the agility, poise or response to satisfy a keen driving enthusiast.

The C250d Coupe AMG Line starts at £37,825. BMW’s comparable 420d M-Sport, meanwhile, is usefully cheaper at £35,495 while Audi’s A5 2.0 TDI S line starts at £36,600. The 4-series isn't as entertaining as it could be either, but it's a more engaging proposition than either the C-class Coupe or the A5. Interestingly, that changes when the performance models are concerned: We'd pick the AMG C63 Coupe over BMW's M4. 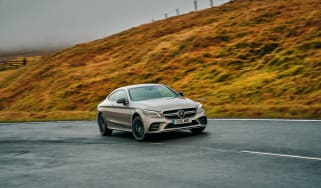 Not just a C63 without a V8 engine, the C43 draws a finer line with its own character, something an S5 lacks almost entirely
2018 Mercedes-AMG C43 Coupe and Cabriolet prices announced 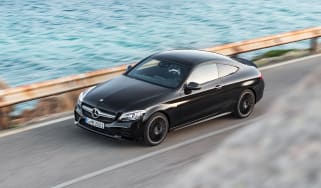 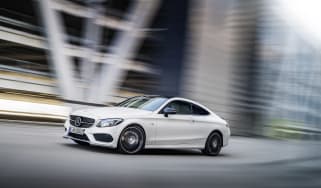 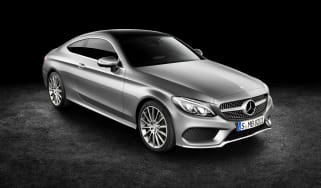 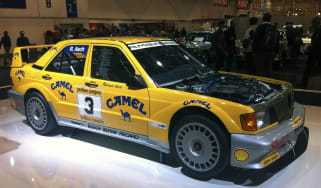 A gallery from the 2014 Techno Classic Essen – including perhaps the most impressive display of Mercedes-powered racing cars ever seen.
Mercedes C63 AMG Edition 507 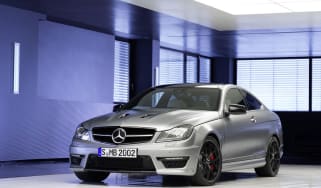 Mercedes-Benz has given the C63 a power increase, pushing the 6.2-litre V8 to over 500bhp.
Shelby GT500 vs Mercedes C63 AMG drag race video 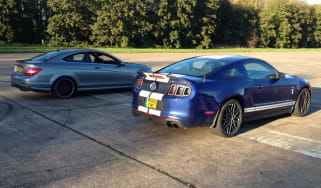 Which is faster in a drag race: the Mercedes C63 AMG Coupe or Shelby GT500 Ford Mustang?
Skip to HeaderSkip to Content