New Coupe should offer a slightly sportier driving experience than the saloon; AMG model to follow 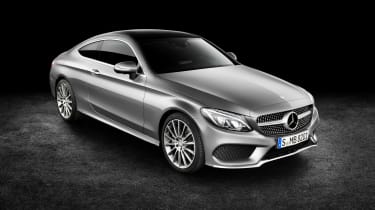 It took Mercedes-Benz a surprisingly long time to offer a coupe in the compact executive car segment.

While rival BMW contently sold large volumes of two-door 3-Series, the C-Class remained four-door or estate-only until its third generation. Now, it’s an integral part of the range – and the latest model has finally surfaced undisguised.

In Mercedes’ words, the C-Class Coupe is ‘athletic and sporty… vivid, sensual.’ We’d not disagree explicitly, though it’s very much a car conforming to the brand’s most recent coupe norms, with large similarities to the S-Class Coupe and the desirable AMG GT.

At the front, it’s all C-Class, but towards the rear it’s more rakish than its saloon equivalent. In fact, you’d struggle to tell it was based off its four-door sibling, with a fastback profile to the roof for less of a three-box shape than a BMW 4-series or Audi A5.

The sleek shape cuts through the air with a drag coefficient of 0.26, to the benefit of performance, economy and refinement, while the car is 95mm longer and 40mm wider than its predecessor. Next to the saloon, its suspension is also 15mm lower.

Liberal use of aluminium has ensured the new car is lighter than its predecessor – alloy components now include the wings, bonnet and boot lid. There’s greater torsional stiffness too, beneficial for both dynamics and crash safety.

New four-link suspension sits up front and there’s a five-link setup at the rear, which Mercedes says delivers ‘sporty axle kinematics’ and high lateral stability. Steel suspension is standard, with two types of adaptive damping available to buyers – a comfort-orientated Agility Control setup, and dedicated sports suspension with Mercedes’ Direct-Steer system, which varies load and response according to speed.

Airmatic air suspension is also an option. Electronic control continually adjusts damping at each axle, while Eco, Comfort, Sport, Sport+ and Individual drive modes can be selected at the driver's whim.

Diesel buyers can choose between 168bhp and 201bhp, 2.1-litre four-cylinder units. No performance or economy figures have yet been announced, but differences to the similarly-motivated saloons should be marginal – for the brawniest diesel, expect a 0-60mph sprint of around 7 seconds and economy of more than 50mpg.

A suite of safety and infotainment features complete the package, including Distronic Plus with steering assist and Stop&Go pilot, for near-autonomous driving in certain scenarios, and brake assist functions that help mitigate or prevent pedestrian and vehicle collisions.

Some models will also be able to park themselves, while adaptive high beams, traffic sign recognition and 360-degree cameras should take the strain from other driving situations.

As ever, AMG Line trim is available to enhance both exterior and interior – though with a full-fat AMG model on the way (albeit disguised, for the time being), there’ll soon be extra performance to add to the new Coupe’s appeal.