The high-performance coupe sector has just gained another member 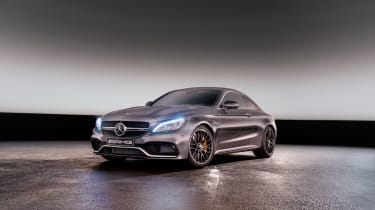 The new 469bhp car – or 503bhp in S trim – is based on the all-new Mercedes-Benz C-Class Coupe, details of which also appeared recently.

Visually, the C 63 is every inch an AMG model. Where the regular C-Class Coupe has swoops and curves inspired by the S-Class Coupe, the AMG adds aggression, with only the doors, roof and bootlid shared with the standard coupe.

Along the side there are AMG-specific skirts and new alloy wheels – from 18in to 19in, on the C 63 and S – while the rear bumper receives a functional diffuser element, a pair of chrome-plated twin tailpipes and a slim lip spoiler atop the boot lid.

Flared arches at the front and rear make the AMG 64mm and 66mm wider respectively at each end, allowing the use of wider tyres. At the front axle, AMGs now wear 255 section rubber, and up to 285mm at the rear – helping control accelerative forces from the car’s turbocharged V8 engine. 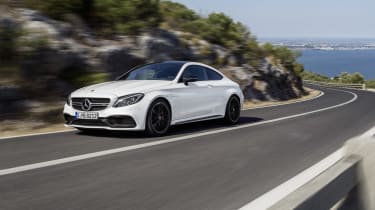 Suspension at the front and rear has also been revised, partly to facilitate the increased track and partly to enable handling characteristics appropriate of a car carrying AMG badging.

That engine too is AMG-appropriate. Like the C 63 saloon and estate that the coupe joins, the car features AMG’s 3982cc, ‘hot V’ V8 engine. This positions the twin turbochargers within the V of the engine block and cylinder heads, helping to squeeze the substantial power unit under the bonnet of the relatively compact car.

An AMG Speedshift seven-speed automatic delegates power to the rear tyres via a limited-skip differential, and can of course be controlled manually with paddles behind the steering wheel. AMG Dynamic Select allows the driver to choose four different transmission modes, culminating in an ultra-aggressive ‘Race’ mode. The car’s damping characteristics are also adjustable, via AMG Ride Control.

The result is a 0-62mph sprint of four seconds flat in the C 63 Coupe and 3.9sec in the S – each slightly faster than the saloon – with a 155mph speed limiter AMG’s one concession to restraint. Less restrained will be the C 63’s exhaust system, with flaps that open to unleash the V8’s true character.

The new Mercedes-AMG C 63 Coupe will make its official debut at the Frankfurt motor show on September 15, with a market launch in March 2016.

Mercedes has now confirmed that the C63 Coupe will cost from £61,160 in the UK. The more powerful C63 S is £66,910. Those interested in the limited run Edition 1 Coupe, which features unique interior and exterior details, will have to put down £76,900 to get their name on the order books.