We drive the new BMW 4-series coupe in petrol powered 435i form, the sportiest until the M3 coupe-replacing M4 arrives 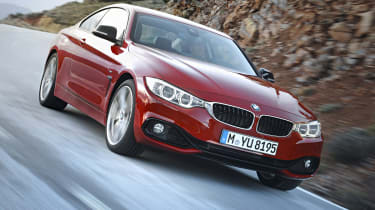 The BMW 4-series is the new name for the 3-series coupe. More specifically we’ve driven the 435i, the most powerful petrol version until the M4 – aka the new BMW M3 – arrives.

With its lower centre of gravity, longer wheelbase, wider track and retuned suspension, the 4-series should trump the already outstanding dynamic attributes of the 3-series saloon it’s based on. As you’ll read in a moment, it does.

For now, the most potent 4-series is the 435i, and it ain’t slow. It gets the only six-cylinder TwinPower petrol engine in the otherwise four-pot launch line-up and develops 302bhp at 5800rpm and, perhaps more tellingly, 295lb ft of torque between 1200 and 5000rpm. Our test car gets the optional ZF eight-speed paddleshift automatic transmission, which shaves 0.3sec from the standard six-speed manual’s 5.4sec 0-62mph time while both cars’ top speeds are limited to 155mph.

The 4-series coupe’s ride height is 10mm lower than the 3-series saloon’s, giving the 435i the lowest centre of gravity of any current BMW. In line with a strengthened front section that makes the 4-series’ body 60 per cent stiffer than the old 3-series coupe’s, the suspension has been tuned to suit with recalibrated springs and dampers and tweaked camber angles.

If there is a disappointment, it comes early when you fire up the 435i’s 3.0-litre turbocharged six. Anyone expecting a toned-down version of the M135i’s stirring engine note will feel let down. I did, at any rate. Silky and sonorous, yes, but not much small-hair-on-back-of-neck action, even as it rushes toward the 7000rpm red line. And it exhibits a slightly rattly small-end bearing quality under acceleration reminiscent of some older BMW straight-six designs.

No matter. That acceleration is entirely convincing and thanks to that broad torque band and the pin-sharp marshalling of the magnificent eight-speed auto is present the instant you flatten the throttle. A fast car in a drag race, no doubt about it.

But it’s on the twistier hillside roads of our Portuguese test that the 435i feels even quicker. Switch from Comfort to Sport or Sport Plus – our Sport trim car had the optional adaptive suspension and steering systems fitted as standard to the M Sport models – and you lose the subtle, almost subliminal, sense of floatiness to an altogether firmer, yet no less comfortable, set-up with meatier steering, keener turn in and, in Plus mode, just enough slackening of the ESP and traction electronics to balance out the chassis under power.

There isn’t much understeer in any case and it wouldn’t be stretching a point to describe the available grip as prodigious - certainly greater than an E92 M3 on sensible rubber would be able to muster. But it isn’t just the extremes that impress. It’s the way it all flows and hangs together so easily and transparently, the way it inspires so much confidence. Although the 435i isn’t the sort of car that will constantly goad you into driving faster – it’s too couth for that – there’s huge ability should you need it.

Its key rivals are the Audi A5 – more specifically the 328bhp, £43,395 Audi S5 quattro when you’re comparing the 435i – and the Mercedes C-class coupe, which starts at £38,005 in 302bhp C350 AMG Sport form. The BMW certainly has the measure of the Merc on first impressions, and the capable S5 could have trouble competing dynamically, too.

The new 4-series name tees up an intriguing new hierarchy when the M cars come on stream early next year. The new M3 and M4 will be launched at the same time with twin-turbocharged straight-six engines more powerful than the E92 BMW M3’s naturally aspirated V8. But it’s clear that, from a driver’s perspective, the M4 will take centre stage and assume the mantle of ‘core’ M car and icon-in-waiting, leaving the M3 as the marginally less dynamic default choice for those who can’t do without four doors.

Oh and a 4-series convertible and Gran Coupe are likely to follow in due course as BMW goes further niche hunting.