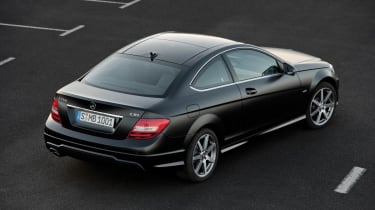 Mercedes has revealed the new C-Class Coupe at the 2011 Geneva motor show. The two-door hits UK shores in June, adding a third body style to the recently facelifted C-Class range. It looks smart, though is unsurprisingly nothing too revolutionary. From the front, it is recognisably C-Class, whilst an upswept beltline along the flank rises to meet a raked C-pillar, giving it a pronounced coupe profile. UK models will all get the body styling and 18in alloys from the AMG Sports Pack as standard.  On offer at launch will be a choice of three petrol and two diesel power units, equipped with start/stop technology as standard. All engines fall under Mercedes’ ‘BlueEFFICIENCY’ sub-brand, marking out the fuel efficiency credentials of the new two-door.  At the top end of the petrol range is the C350, with a 3.5-litre V6 unit developing 302bhp and 273lb ft. Lower down the range are two 1.8-litre four-pot units in the C180 and C250, with 154bhp/184lb ft and 201bhp/228lb ft respectively.  Standard on the C250 and C350 will be the firm’s 7G-Tronic seven-speed automatic transmission, whilst the C220 and C250 CDI diesel variants, which develop 168bhp/295lb ft and 201bhp/369lb ft respectively, will get a six-speed manual ‘box. Fuel economy claims are strong, ranging from a quoted 41.5mpg average for the rang-topping C350 to 64.2mpg for the C220 CDI oil-burner. The interior is lifted straight from the C-Class saloon, but features the three-spoke steering wheel from the new CLS with a chromed central spoke. Mercedes’ Comand entertainment/nav system will also feature internet access for the first time, and offers compatibility with Google Maps for the navigation function. A selection of warning systems and driver intervention systems based on radar and camera technology are on offer, including ‘Attention Assist’ as standard, (to detect driver drowsiness), and ‘Distronic’ (radar guided cruise control) as an option.  Based on W204 C-Class underpinnings, the new four-seater coupe slots in to the Mercedes range beneath the E-Class coupe and provides an obvious challenger to the BMW 3-series coupe and Audi A5. The death knell was also recently sounded for the smaller Brazilian built Mercedes CLC coupe, a car that has never been a credible challenger to either the BMW 1-series or Audi A3. There will be a C63 AMG coupe, although whether it will use the 6.2 litre V8 of the C63 saloon or AMG’s new 5.5 twin-turbo V8 is, as yet, unknown. With the recently facelifted C63 AMG boasting the bigger, naturally aspirated unit, we’d wager the same treatment for the two-door. It will give Mercedes a direct rival for the Audi RS5 and BMW M3, and is tacitly understood to be one of the most polished efforts to come out of Affalterbach in some time. There is no official word on pricing yet, though expect the Mercedes C-Class coupe to cost a couple of thousand pounds dearer than an equivalent C-Class saloon. That should see the C-Class coupe kick off from around £27,000 when UK sales begin in June.

See our huge gallery of the new Mercedes-Benz C63 AMG

The facelifted Mercedes C-Class saloon and estate are here