Brabus has released a range of the Mercedes C-Class upgrades, including performance and styling 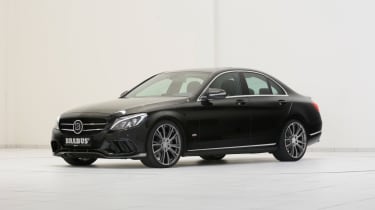 Bottrop-based Mercedes modification firm Brabus has revealed details on its tuning packages for the latest C-Class, with styling tweaks and go-faster bits for both petrol and diesel models. Now in its 35th year, Brabus is best known for 200mph takes on some of Mercedes' most powerful cars, but it also has a long tradition of enhancing the humbler models too. The Brabus C-Class refinement program is more subtle than most, and offers power upgrades for the petrol-powered C200 and the diesel-fired C220 Bluetec. Dubbed Brabus PowerXtra B20.2, the performance kit amounts to a plug-and-play auxiliary control unit for the engine's ECU. The power boost only takes effect once engine temperature and other parameters are in the green, ensuring not only longevity and reliability, but also retaining compliance with the latest Euro VI emissions standards. The C200's standard 184bhp output is boosted by 40bhp and torque is up by 22lb ft to 243lb ft. This drops the standard car's 7.5-second 0-62mph sprint by half a second, while top speed creeps up to an even 150mph. For the diesel C220 Bluetec, the Brabus PowerXtra D3 kit adds a full 48bhp for a 218bhp peak output. Torque jumps to a hefty 332lb ft from an unfettered 295lb ft, while performance nearly matches that of its petrol counterpart - 62mph is reached in 7.1 seconds, and top speed is just 1mph shy of the C200. Exterior modifications give some hint as to the performance on offer. Where normally a three-pointed star dominates the grille, Brabus installs its familiar 'B' logo, echoed at the back. Brabus claims its deeper front bumper with Brabus-designed air vents and a lower splitter leads to greater downforce, while a small lip spoiler on the boot lid does likewise. Buyers can also specify a set of side skirts - enhanced with optional LEDs - and at the back Brabus fits the obligatory diffuser element, pre-cut for a quad-pipe Brabus exhaust system. A selection of 18, 19 and 20-inch alloy wheels is available, the largest in Monoblock F and R designs - 8.5Jx20 at the front and 9.5Jx20 at the rear. Depending on your choice, Brabus wraps these in tyres developed with its partners from Continental, Pirelli or Yokohama. A Bilstein-developed suspension kit with 'sporty-comfortable' settings helps close the gap between tyre and wheelarch. As ever, buyers can choose from a selection of interior alterations too - everything from retrimmed leather and Alcantara seats and door cards to quilted leather floors, Brabus-branded floor mats, aluminium-faced pedals and gearshift paddles, illuminated sill plates and even Brabus-logo'd door lock pins. 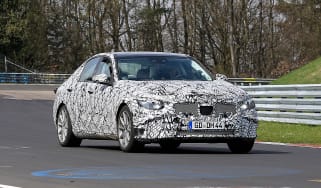