Mercedes C63 AMG: C-Class next to get AMG’s huge V8 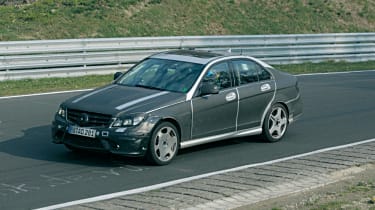 While we’ve all been eagerly anticipating the impending scrap between BMW’s new M3 and the Audi RS4, the up-coming Mercedes C63 AMG has rather slipped under the radar. It will be unveiled at the Frankfurt show in September, and with a 6.2-litre V8 producing around 475bhp it should blow the doors off its German rivals.

AMG is determined that the C63 won’t be just a sophisticated dragster. The standard C-class is a solid dynamic base and cars like the E63 and the Black Series SLK and CLK show AMG's ambitions for its super-Mercs. The C63 will feature significant changes to the front axle and steering system, to improve feel and response, and there will be the option of a ‘Performance Package’, which will include a multi-plate limited-slip differential.

AMG acknowledges that the current 7-speed automatic gearbox has its limitations, most notably the lack of a downshift-smoothing throttle blip, and we were told the C63’s 'box will ‘combine the best of a torque-converter automatic and a DSG-type gearbox’. That should mean quicker gearshifts and more control.

The C63’s unapologetically aggressive dynamic set-up will be mirrored in its styling, which is said to be much more confident than the previously very subtle AMG products. In fact some within Mercedes are concerned that it’s a bit too outrageous.