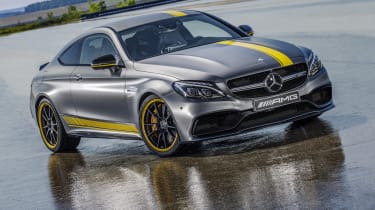 Mercedes-AMG has brought an ‘Edition 1’ trim level to the C63 Coupe. The package adds striking decals and exclusive styling features that set the model apart from the rest of the range. The carmaker unveiled the C63 Edition 1 alongside its new C63 DTM racer, with both cars set to make their public debuts at the Frankfurt motor show later this month.

The standout features on the range-topping C63 S Coupe Edition 1 are yellow stripes along its centre and sides (mimicking the DTM car),  stripes on the door mirrors, yellow rims on the 19- and 20-inch (front and rear) wheels and yellow brake calipers. These contrast the Magno Selenite Grey matt paint, a colour exclusively available with the C63 S variant. Carbon-ceramic brake discs are also standard on the S. 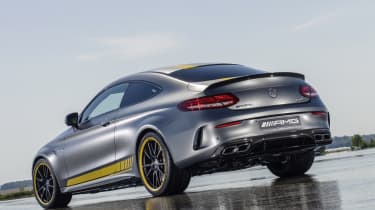 The non-S C63 Edition 1 gets grey stripes instead of yellow ones, while both variants receive a gloss-black aero package made up of a new front spoiler, side skirts, a rear diffuser and a more prominent rear spoiler. The AMG Night package is also available and adds more black detailing to the car’s exterior.

Inside, the AMG seats also gain stripes, with more colour-coded detailing to match the exterior stripes found across the cabin. 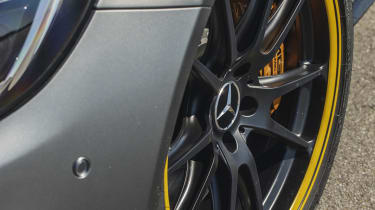 Like the standard car, the Edition 1 C63 S also gets an electronically controlled Drexler limited-slip differential – as opposed to the non-S’s mechanical system – and can accelerate its passengers from 0 to 62mph in four seconds dead, which is a tenth quicker than the C63.

Prices for the Edition 1 are yet to be confirmed, but we expect it to command a £5000 premium over the standard car. That would equate to around £65,000 for the C63 and £71,000 for the S. Order books will likely open after the car’s Frankfurt debut. 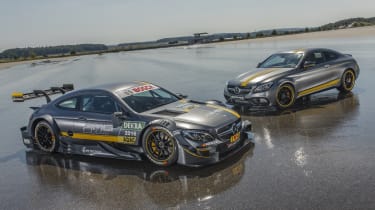 Revealed alongside the Edition 1 is Mercedes’s new C63 DTM car. Set to make its competition debut in 2016, the racer’s biggest changes are its aesthetics, which make it to look more similar to its road-going equivalent than previous iterations.