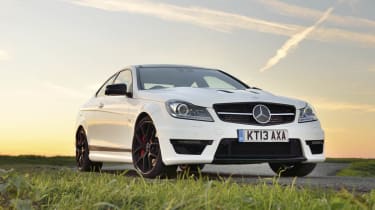 The Mercedes C63 AMG range gains a swansong special via the Edition 507. Available on all C63 variants, prices start at £67,270 for the Saloon, the Estate and Coupe each costing an identical £68,470. All models see a rise of £9995 over standard.

The Mercedes-Benz C63 AMG Edition 507 gets the ‘M156’ V8, with a revised ECU, new conrods, a lightweight crankshaft and forged pistons adopted from the SLS AMG. This brings a weight saving of three kilograms to the internals, while cogs are swapped via the familiar and sharp-shifting (for an auto) MCT seven-speed transmission.

The 507 wears a set of gorgeously spidery 19in forged alloy wheels, while the front axle gets new 360mm ‘composite’ brake discs. That’s not carbon-composite, however, but weight-saving aluminium for the inner ‘barrel’ and cast iron for the outer disc. Curiously, a locking diff is not standard. You’ll need to stump up an extra £1745 (an essential requirement), which seems rather mean considering this car’s sporting pretensions. Bodywork revisions are limited to the vented aluminium bonnet from the Black Series (nice), a gloss black finish for the spoiler lip on the boot lid, the mirrors and the radiator grille (OK), and some stickers (naff).

As you’d expect, the driving experience is dominated by the engine. It fires up with a purposeful whumpf and delivers an accumulation of torque from zero to 5200rpm that is infinitely more satisfying than the flat torque curves of most modern turbocharged engines. Oh, and it’s bonkers fast and ultra responsive, and I know from experience (I ran a Performance Pack C63 for a year) it will only get more responsive and more powerful over time.

Our test car – a coupe – is fitted with the standard AMG Sports Suspension, which does a fine job of keeping the body composed but not without compromise to the ride quality. The damping is abrupt in normal driving conditions, mitigated a little by a pair of excellent seats, and the resistance to roll is impressive – this isn’t a your normal wafty-riding Merc. AMG ‘Performance’ suspension is an option, but I’d be wary of this: it’s 20 per cent stiffer.

The steering is delightfully crisp and transparent, communicating nuances in the road surface and overall grip levels with remarkable clarity. This is a crucial aspect to the car’s overall dynamic behaviour, because you need to know exactly what the nose is doing before you can bring the rear into play – which is what this car is all about.

At present, I’d wager there is no better car in which to learn the discipline of oversteer than a C63 AMG with a locking diff. You can feel every stage in the process from grip to slip, and meter it finely with the incredibly responsive throttle pedal and steering. A Toyota GT86 does the same up to the point where the car is sideways, but the lack of power means you can rarely drive through it on the throttle. With the C63 you can instigate oversteer at almost any speed – and hold it – with ease. Not only that, but when you’re not in the mood the electronic aids do a fine job of restraining the 507’s lunatic side without ever feeling over-intrusive.

Until the new BMW M3 and M4 arrives, the C63’s sternest competition is in the shape of the Audi RS4 and RS5, a saloon, coupe and Avant estate range that’s all four-wheel-drive and with an equally sonorous 444bhp 4.2-litre V8 engine. Each C63 variant has its equivalent RS licked for fun, though.

That the Mercedes C63 AMG Edition 507 also does the ‘normal’ road car stuff so well is the cherry on top. It is beautifully built, has a brilliant infotainment system and looks extremely handsome. I won’t mention fuel consumption, but I will say that the 507 is an easy five-star evo car. The only reservation is that there are plenty of C63s out there with the Performance Pack that offer similar performance and style for much less.