Official pictures and details of the Mercedes-Benz CLA, an A-class saloon with a super low drag coefficient 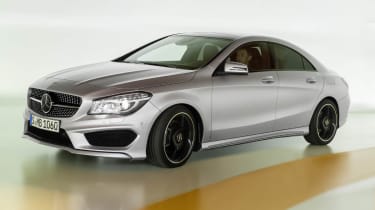 Mercedes has unveiled its new CLA. Effectively a saloon version of the A-class hatchback, it apes its bigger CLS cousin with more coupe-like styling. It doesn’t just look sleek, though; with a drag coefficient of 0.23 Cd, it’s the most aerodynamic production car on record. By comparison, a Porsche 911 GT3 figures at 0.31 Cd, while the regular A-class boasts a more svelte 0.26. The streamlined figure is helped by a number of the CLA’s design and styling touches, including aerodynamic wing mirrors and serrated spoilers on the wheel arches, while there is extensive underbody paneling. The result is swifter performance and greater fuel economy. The CLA is actually 39mm longer than a Mercedes C-class, though its emphasis on styling means it’s unlikely to be more spacious. Unlike some coupe-saloons, it gets a full five-seat layout inside. Under the skin, it’s very similar to the A-class. There are three petrol engines – the CLA180 and 200 use a 1.6-litre turbo mated to a six-speed manual gearbox, and possess 120 and 154bhp respectively, while the CLA250 twins a 208bhp 2-litre turbo with a seven-speed twin-clutch auto – and two diesels, the 134bhp 1.8-litre CLA200 CDI and 168bhp 2.2-litre 220 CDI, the latter gaining the twin-clutch transmission. Fuel economy ranges from a claimed 45.6 mpg for the CLA250 to 67.3mpg for the CLA200 CDI. The CLA’s suspension comprises a MacPherson front axle and independent multilink rear, with unique tuning on the back axle to improve ride comfort. Like the A-class, Comfort and Sport chassis options are available, the latter lowering the car 20mm at the front, 15mm rear. There’s the plethora of safety technology we’ve come to expect from Mercedes, too. A highlight is Collision Prevention Assist, which detects obstacles ahead of the car and calculates the braking needed to avoid hitting them. It also aims to protect from rear collisions at speeds above 4mph. Mercedes-Benz CLA sales start in March 2013, with deliveries from June. UK prices haven’t yet been announced, but we predict a starting point of around £25,000. And an AMG version, twinned with the Mercedes A45 and using four-wheel drive, is all but certain.