Clearest shots yet of the second generation Mercedes CLS 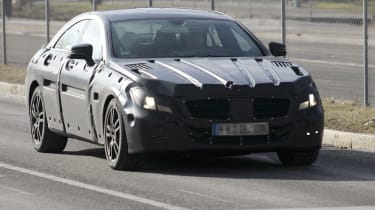 The car starts selling in 2011. Hidden under heavy black disguise, the new four-door coupé only shows itself through the headlights, rear lights, side mirrors, tyres and the roof. Bits of the tailpipes can be seen sticking out through two rectangular tips on either side - similar to the new E-Class saloon. A front grille shaped like two kidneys could be mistaken for one from another German brand. The CLS was the pioneer of the 2+2-seater four-door coupé when it launched in 2004.

Power is expected to come from a wide range of sources among which are petrol, petrol turbo and diesel turbo engines, as well as a BlueHybrid model that will use the same engine system as the S400 BlueHybrid. An AMG model should top the range and produce a revised target of about 517 hp. Mercedes' 7-speed gearbox will be offered with these powerplants.