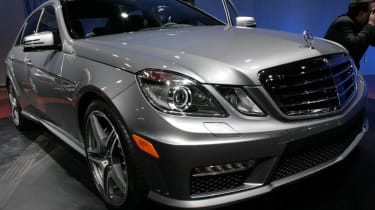 At the very first press conference of the New York Expo, Mercedes has wowed the crowds with a pair of dramatic world debuts.

As expected the potent E63 AMG rolled onto the stage to huge applause from the assembled crowds, demonstrating America’s love affair with powerful V8 muscle cars is clearly as strong as ever.

And so is the car’s performance. The firm’s tuning arm has fitted mechanicals from the SL63 AMG, so it gets a naturally aspirated 6.3-litre V8 with 518bhp and 465lb ft of torque. That’s 11bhp more than the previous car, but the new E63 returns 22.4mpg – an improvement of 2.6mpg.

An AMG bodykit beefs up the looks, as do 18-inch alloys, LED running lights and chromed quad exhausts. The mega-Merc goes on sale in August, from around £65,000.

But the big surprise was a hybrid version of the ML-Clas SUV. Called the ML450 Hybrid it combines a V6 petrol engine with twin electric motors that can work independently or in tandem with the engine.

Combined power is 335bhp, but Mercedes claim it only consumer half the fuel of an ML500, while still producing 90 per cent of the performance. The eco off-roader will only go on sale in the US and Canada, putting it in direct competition with the BMW X6 hybrid.

Information on the SLS supercar was scarce – except for conformation that we’ll see official pictures of the production version later in the summer, with a world debut at the Frankfurt Motor Show in September.

Elsewhere on the stand was the insane, £250,000 SL65 AMG Black Series and uber luxurious Maybach Zeppelin.