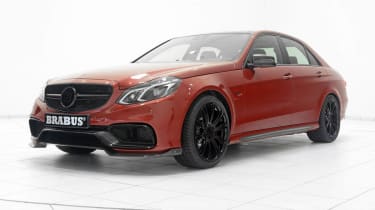 German tuning company Brabus has released details of its latest highly tuned Mercedes AMG product, the 850 6.0 Biturbo. Producing 837bhp and 1069lb ft of torque, the modified E63 AMG’s Brabus V8 can propel it to a top speed of over 217mph, helping it keep pace with the world’s fastest four door saloons, as well as the claimed top speeds of the McLaren P1 and Ferrari LaFerrari.

Utilising larger turbos, an uprated cold-air intake system and optimised manifold, the freer breathing 850’s focus on maximum performance is clear under the bonnet. Not least because Brabus has wrapped the intake and turbocharger piping in gold heat-reflecting sheathing, something normally restricted to the engine bays of the most exotic supercars, ensuing intake temperatures are at a minimum to produce maximum power at all times.

This gives the 850 the ability to push peak levels of torque through its seven-speed Speedshift MCT gearbox from just 2500rpm, before peak power then arrives at 5400rpm. The 0-60 time is 3.7sec for rear-wheel drive versions, whilst the optional four-wheel drive layout shortens that time by six tenths to just 3.1sec – hypercar quick.

Such performance demands improved aero, so the 850 has been fitted with a carbonfibre front spoiler to reduce lift at high speed, as well as a carbonfibre rear diffuser and boot-lip to further increase downforce. Styling cues such as black quad exhausts and badges are matched by 20-inch Brabus Monoblock wheels of up to 10.5J wide, giving the exterior of the 850 an angry aura that is no doubt matched by its powerplant.

The 850 isn’t all boost and power figures however, because a handcrafted interior of leather can be ordered in any colour, keeping the car in line with the level of luxury associated with Mercedes. Racing pedals and contrasting aluminium details do ensure things aren’t too calm inside though, if the rumble of a 6-litre V8 and burbling valve-actuated exhaust weren’t enough...

Recent buyers of the standard Mercedes E63 AMG need not worry about missing out on the 850, because Brabus can also offer the option to upgrade existing E63s to 850 spec. These, along with complete cars from Brabus, will come with a tuning warranty lasting three years/62,000 miles.