Mid-sized saloon is about to be refreshed with new tech, styling and powertrains 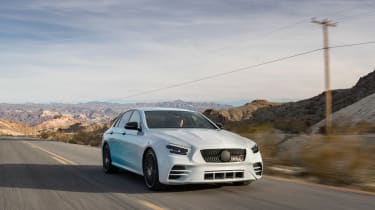 The 2020 Mercedes-Benz E-class is nearing its introduction later this year, with a substantial mid-cycle update that will focus on new styling, tech and further electrification. As the current W213 model was first introduced at the beginning of 2016, it’s likely we’ll see this updated model at the upcoming Geneva motor show, where we hope standard models will be joined by their requisite AMG versions too.

As usual with the E-class mid-cycle update, the timing of its release generally coincides with the all-new S- and C-class, two models that often drive a whole generation of Mercedes-Benz design language and interior tech. As such, the E-class’s update is generally more substantial than with most other Mercedes-Benz models – something clear from the previous W212 generation, which included a huge variety of upgrades, Mercedes even stumping up for a new rear-door pressing (a major change for a mid-life refresh)

> Click here for our review of the Audi A6

It comes as little surprise to see a substantial change in design both at the front and rear, highlighted by the smaller front grille (a smaller grille? In 2020? Surely not…) flanked by slimmed-down LED headlights. AMG-line models are obvious with their larger intakes and single-bar insert in the grille, but all models look likely to receive a twin-domed bonnet that has appeared in the Mercedes range on and off for years.

The rear end also picks up a substantial design update, centred on the horizontally opposed tail lights that now extend onto the bootlid in contrast to the current model’s upright, single-piece lights. This might sound like a small change, but it will give the E-class a completely new signature at night. 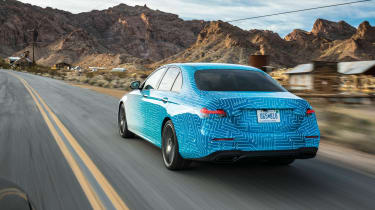 The body-in-white looks unchanged though, as is the case with a majority of mid-life facelifts, but any changes still look more substantial than is the norm. Inside, expect the dashboard to remain largely the same in shape and detail, but with the adoption of new Mercedes infotainment software introduced on the A-class, and a revised touchpad input method replacing the current scroll wheel. New steering wheels are also on the cards, incorporating the different controls for that new infotainment system.

Powertrains are still to be confirmed, but we’re expecting an even wider application of hybridisation in both mild and plug-in forms. More potent AMG models such as the E53 already utilise mild-hybrid applications, but rumours persist of 2020 being the year AMG fully embraces the electrically boosted V8. It remains to be seen if it’ll reach the E-class, or be reserved for the more potent GT 4-Door model. 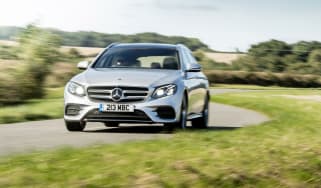