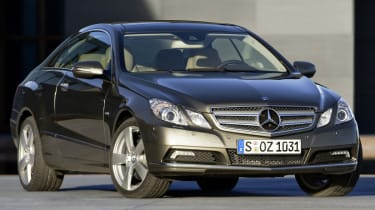 It’s time to say goodbye to the Mercedes CLK and welcome back an old name. This is the Mercedes E-class Coupe, the German brand’s big debutant at the Geneva motor show.

And unlike the old two-door E-class, this one seems to have a healthy dose of sporting intent to it. For starters it’s the most aerodynamically slick production car with a drag coefficient figure of 0.24 Cd. There’s also a new Agility Control setup, which adjusts the suspension automatically to cope with differing driving conditions. It aims to make the E coupe a more dynamic drive than its CLK predessor.

Engine-wise, the big news centres around efficiency. Fear not, though, because power and torque don’t suffer in the process. Perhaps the biggest seller will be the four-cylinder E250 CDI. It’s a 201bhp, 369lb ft diesel that also manages a claimed 53.3mpg while emitting 139g of carbon dioxide per kilometre. Put it along side a comparative engine in the CLK that’s a 36 per cent rise in power coupled with a 17 per cent drop in fuel consumption – not bad going at all.

Topping the range until AMG has its way is the E500, which does without boasts of extra efficiency (25.9mpg claimed) and is simply a hefty V8 boasting 383bhp and 391lb ft. It’s the same unit as the Mercedes CLK500, a car it shifts to 62mph in 5.2sec. Expect similar stuff in the E500 coupe, with an identical and electronically governed 155mph maximum.

Brake Assist Plus is on the options list, a system that was perhaps made famous on the S-class. It senses the car heading to quickly towards a car or object in front and applies the brakes accordingly. There’s a range of other safety gizmos too, in the shape of pedestrian-friendly Active Bonnet and Attention Assist, which detects via a dizzying array of signals whether the driver is in need of a rest.

UK sales of the CLK replacement begin in June. It goes on sale with two spec levels, SE (grey car, pictured) and Sport (white car), the latter benefiting from an AMG bodykit and 18in alloys. Prices will be announced nearer the summer.

The new E-class Coupe will be one of the highlights of the 2009 Geneva motor show. It will be unveiled on March 3, when evo.co.uk will be reporting live from the show floor. In the meantime read our show news and previews.