Mercedes has unveiled the new GLA concept ahead of the official Shanghai motor show reveal. Details and pictures here 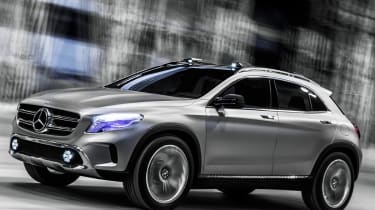 Mercedes is unveiling its new GLA Concept at the Shanghai Motor Show next week, a compact SUV that will rival the likes of BMW's X1 and the Range Rover Evoque when it reaches production next year.

Based on the A- and B-Class platform, the GLA Concept has the same 211bhp four-cylinder, 2-litre turbocharged petrol engine as the current A250, mated to a 7G-DCT dual-clutch gearbox. Power is channeled to all four wheels via 4-MATIC all-wheel drive.

A hot GLA 45 AMG is also on the cards, which will use the 2.0-litre, 335 bhp turbocharged petrol engine of the A45 and CLA 45 AMG. Although Mercedes says it is just a concept, the GLA looks pretty much ready for production.

The new baby SUV continues the same, sporty design theme that the A-Class and CLA started, featuring a coupe-like appearance, with prominent shoulders, raising towards the rear of the car. Design features of the concept include, frameless doors, a strict four-seat layout and laser headlights – that not only light the way for the driver, but also can project pictures or videos onto different surfaces. It’s almost certain that none of these features are going to make it into the final production model, which is set to make its debut at the Frankfurt Motor Show later this year.