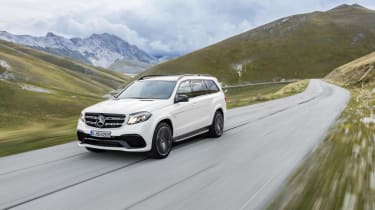 Mercedes-Benz has released UK pricing and specification data for the new GLS, a seven-seat luxury SUV updated to replace the outgoing GL model.

The company is pitching the GLS as the ‘S-class among SUVs’, a market position also denoted by the ‘S’ in the SUV’s moniker. As such, it sits atop the firm’s SUV tree, with the GLE, GLC and GLA denoting progressively smaller vehicles.

The UK range will be limited to three models, starting with the GLS 350d 4MATIC AMG Line, an identically-engined designo Line and a range-topping GLS 63 4MATIC.

GLS 350 models are powered by Mercedes’ 3-litre, V6 diesel. A power output of 254bhp and torque of 457lb ft should be enough to haul the seven-seat SUV along with gusto, and make light work of the 815kg payload capacity – not far short of a basic Ford Transit.

At the same time, CO2 emissions have dropped to 199g/km, with a corresponding decrease in fuel consumption. A nine-speed automatic gearbox helps see to that, while all-wheel drive is standard.

Optional is an off-road driving package to give the GLS broader capabilities on the rough stuff, with a centre differential lock, low-range gearbox, dedicated off-road modes for the standard Dynamic Select driving mode system, and three additional height settings for the Airmatic air suspension. 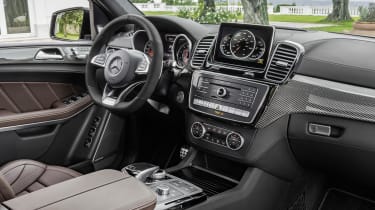 Thus equipped, the GLS can increase ground clearance to 306mm and wade in water up to 600mm deep. The package also includes underbody protection panels and an off-road function for the headlights.

Less likely to go off-road but undoubtedly more potent on it is the third GLS model, the GLS 63 AMG. As we’ve come to expect from AMG, a mighty power output is standard – 577bhp, to be specific – with a torque peak of 561lb ft. The AMG’s gearbox has seven speeds and the all-wheel drive system features a rear bias.

Styling is only mildly altered from the old GL, with Mercedes’ new corporate visage the main difference. The bonnet is also slightly altered with new ‘power domes’, and at the rear the tailpipes are more prominent than before. Interior changes amount to an all-new instrument panel, three-spoke steering wheel and improved centre console.