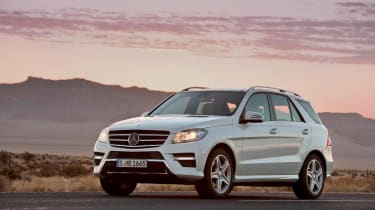 Mercedes has released details of the third-generation of its ML-class SUV, which is set to stick closely to the formula established by its predecessors.

As always these days, environmental performance is high on the list – fitted with a new four-cylinder diesel engine the ML will now be capable of traveling over 900 miles on a tank of fuel, and a new range of petrol and diesel motors with the emphasis on improved economy.

The new ML is based on completely new architecture – shared with the new Jeep Grand Cherokee - although it keeps the same wheelbase as the outgoing version and kerbweights are claimed to be nearly identical too. UK spec is yet to be finalized, but we know there will be more toys and better safety, with up to nine airbags. Mercedes also claims that the car will set new segment standards for noise insulation.

A full hybrid version follows later, but until then the green flag will be waved by the ML250 Bluetec, which boasts the combination of 201 and 368lb ft of torque, along with fuel economy of 47mpg on the official combined cycle. The twin-turbo four replaces the old 300CDI V6 and offers exactly the same power and torque while using 28 percent less fuel. Merc reckons it will account for a third of European sales. Further up the tree the V6 diesel ML350 Bluetec gets its output boosted to 254bhp, good for a claimed 7.4 second 0-62mph.

Petrol engined versions will be of minority interest in the UK, but the ML350 gets a new V6 engine with a 60-degree vee, more power – an increase to 302bhp and CO2 emissions that dip below the 200g/km barrier. Just: the official score is 199g/km. An AMG version will follow later.

UK pricing and spec will be confirmed nearer to the ML’s launch later this year.