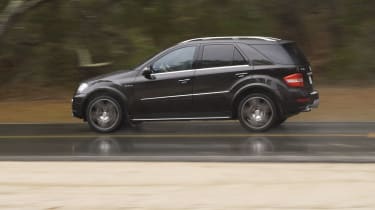 Full marks to AMG for not blinking. While the world economy slams into reverse and the performance SUV – arguably already the most despised vehicle category on the planet – is hit with another wave of public derision, Merc’s go-faster division not only sticks its hand up for inventing the monster-motored 4x4 (1998’s ML55 AMG) but also, just to rub it in, unveils two special editions of its current ballistic behemoth, the ML63 AMG, to celebrate the boss ML’s ten years of unfeasible haste.

Both the ‘10th Anniversary’ and the ‘Performance Studio’ are essentially design, trim and equipment packages, AMG reasoning that the 503bhp developed by the naturally-aspirated 6.2-litre V8 that serves across several model lines is enough to be going on with. It’s an output that keeps the most muscular M-class just ahead of the Porsche Cayenne at the top of the SUV power table.    We opted for a leisurely morning run along California’s Pacific coast in the marginally more opulent Performance Studio, so named to highlight the cosmetic dimension of AMG’s high-end operation. And, to be frank, it’s all a bit bling. The 21in alloy wheels are very shiny, and so are the numerous applications of chrome strip to the bodywork.

The slightly over-wrought character doesn’t let up on the inside, the porcelain-coloured Nappa leather upholstery featuring a quilted diamond pattern on the seats and door panels. The same pale hide covers the lower part of the facia, while stark relief is provided in black: predominantly the leather that covers the upper part of the facia, the seat piping and the piano lacquer wood trim. The sole paint option looks black, though it’s called metallic Peridot Brown.

What it all means, of course, is that the world’s most powerful SUV is even easier to spot than before. If you’re comfortable with that, prepare for the stares. Otherwise, stick with the mechanically identical ML63 AMG, which is an equally pleasant way to travel – commanding visibility, M3-humbling performance, great refinement, secure handling, fine ride – and considerably less conspicuous.