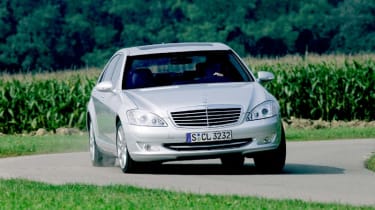 A few months ago I visited Mercedes-Benz's simulator in its Berlin R&D centre. Driving an outgoing-model S-class firmly anchored to the floor while the surround-screen fooled me into credible autobahn-storming, I was struck not only by the effectiveness of the new Brake Assist Plus and double-radar active cruise control features, but also by the lack of road noise.

Of course there was no road noise. The Merc wasn't really moving. But then I've just been driving the brand new S-class that sports all this technology and more, and that didn't create any road noise either. OK, sometimes a tiny bit, but its undertyre refinement is absolutely extraordinary.

So the new big Benz must have loads of insulating rubber and piles of soundproofing and feel like you're driving a duvet. Not so: this rather large car, 43mm longer in long-wheelbase form, 29mm taller and 16mm wider than the old one, is wieldy, easy to manoeuvre, able to perform miracles of mass-disguise.

I'm pointing a long-wheelbase S500, with the new 5.5-litre, 388bhp V8 engine (so why isn't it an S550?), into a sequence of fast, open bends. The steering is not exactly hyper-focused, but it's quick, consistent and devoid of rubbery delay. The ample tyres are gripping convincingly, a bend tightens and the nose follows suit. There's no sense of a behemoth's laziness, of vast bulk reluctant to stir itself from the straight and narrow. The S-class goes where you point it, when you point it. No lurch, no float, no queasiness, even in Comfort mode.

Airmatic DC suspension is part of the reason, with its active dampers. We know this system from other Mercs. But it's the combination of bulk, refinement and agility that's so spectacular. It's like a Jaguar XJ, only quieter and cleverer.

On the centre console, near where the gear selector would be if this hadn't migrated to the steering column (up for reverse, down for drive, prod for park, ultra-simple) is a round turn-and-nudge-and-prod button. Uh-oh, it's the M-B take on iDrive, and we're not going to get on. But Mercedes calls it Comand, and - yes - Simister the Luddite can make it work. The big difference is the way you can prod your way all over the screen to get straight into whatever area of control you want. It's all there, no digging required. Marvellous.

While scanning the cabin, I nibble at the edges of some more technology. The speedometer looks like a normal analogue dial but is actually a hi-res digital image. Within its screen can be had not only sat-nav directions but also live pictures from the optional 'night view assist' system. This uses two infra-red lights, aimed as far ahead as main beam, to give a picture of life beyond dipped beam when using main would dazzle oncoming drivers. Less visible but just as clever is Brake Assist Plus, which doesn't just jam the brakes on fully in a panic stop but modulates the stop to keep you from shunting the car in front while minimising the risk of being shunted from behind. Thank the dual radar in the Distronic Plus active cruise control for that.

The new V8 is a lusty thing, hauling the S-class along with a distant but well-formed rumble when goaded. The seven-speed auto is best left to its own super-smooth devices, with sharper reflexes in the Sport setting, which also firms the suspension and lowers it by 20mm. But if you want to manualise, the old and confusing M-B rocker switches on the steering wheel have been ousted by simple AMG-type buttons, left for down, right for up. So you're less likely to get lost in all those gears.

It's hard to escape the conclusion that Mercedes-Benz once again makes the world's best luxury saloon. Its list of attributes and superlatives is frightening. Pity beauty isn't among them. 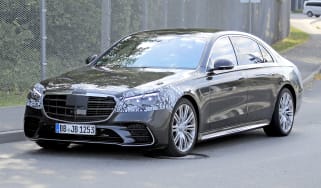