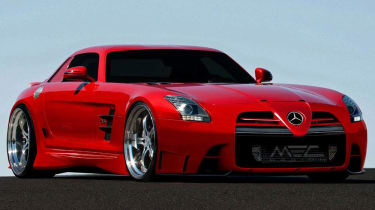 It’s not even on sale yet, but that hasn’t stopped the tuning fraternity. Say hello to the first batch of tweaked Mercedes SLS AMG supercars. First up (and in the main pic) is MEC Design’s go at modifying the modern-day Gullwing. These ideas are just renderings for now (perhaps a good thing), but give an idea of what to expect when the company finally gets its hands on the SLS. MEC’s front styling is certainly striking, with an F1-style nose – particularly fitting with the launch of the Mercedes Motorsport team – and an all new bumper with a brace of revised air intakes. Of most questionable taste, though, are those wheels. There’s a couple of designs available but both are deeply dished, 22in items that rather change the proportions of the usually sleek SLS. The rear gets a new, smoothed-off appearance and gains a dramatic new diffuser. There’s also the Kicherer SLS 63 CP (car in silver, last three pics on right). Like the MEC SLS, it too is going for a bold and slightly garish front end. It boasts a particularly striking grille – which forgoes any Mercedes-Benz badging – although there’s still a three-pointed star on the rear and unlike it’s rival tuner, Kircherer has kept the SLS AMG’s styling pretty much intact. Short of that grille, the addition of a roof scoop and some black dished 20in alloys, it’s a subtle makeover, which is likely to major more on performance tweaks. There is no word on how the 6.2-litre V8 engine will benefit yet, though. It’s equally unclear whether the MEC SLS will boost the standard supercar’s 563bhp and 197mph maximums to take on Kircherer’s effort. We’ll certainly keep you posted, as it’s clear that the tuners have already taken a shine to the Mercedes SLS, much like its McLaren SLR predecessor. Follow evo on Twitter for the latest performance car news