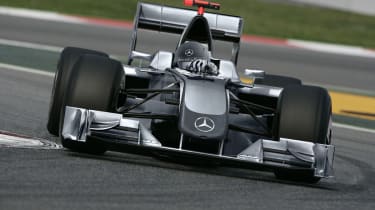 In a surprise move, Mercedes has today announced that it will be competing in the 2010 Formula 1 World Championship with its own team – by buying a controlling interest in Brawn GP.  Mercedes (together with its Abu Dhabi investors, Aabar Investments) has agreed to buy 75.1 per cent of the Brawn GP team, which will be renamed Mercedes Grand Prix to reflect this change in ownership. Ross Brawn (who will remain as team principal) and Nick Fry (Brawn’s current CEO) will retain the remaining 24.9 per cent of shares in the company.  The change comes partly because Mercedes wanted to own an F1 team in its entirety, rather than being seen as just an engine provider. The new rules forcing teams to reduce expenditure have also played a part, as it will be easier for Mercedes to meet the requirements of the regulations by taking over Brawn than by continuing its relationship with McLaren. This means Mercedes will be selling its 40 per cent stake in McLaren back to the McLaren Group, a sale that will be completed by the end of 2011. According to Mercedes, another reason for this sale is McLaren’s ambition to become a car manufacturer in its own right. There has been a growing feeling at Mercedes HQ that it would be very odd having two potentially rival car companies owning the same F1 team, so selling its shares back to McLaren prevents this ever occurring. What isn’t clear, however, is where this leaves the drivers, as it seems Mercedes isn’t going out of its way to re-sign Button, who is already talking to McLaren about a seat for 2010 at near double the money Brawn was offering. It appears Mercedes will sign Nico Rosberg as its lead driver, and the head of Mercedes Sports, Norbert Haug, commented on Sunday that he is also trying to secure a drive for Nick Heidfeld. Formula 1 has never seen so many changes in one year as it has during 2009, and while it is a shame that Brawn GP has only lasted one season in its own right, it achieved more in that fledgling year than most teams do in a lifetime. It looks like the 2010 season will be more exciting than ever, with new teams appearing throughout the grid. We’ll bring you more news as we hear it.