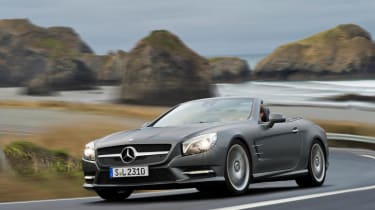 Mercedes has revealed its all-new SL. It’s the roadster’s sixth iteration since its introduction 60 years ago. ‘SL’ has always stood for ‘sport lightweight’, yet many would argue the outgoing 1.9-ton SL500 is anything but. Mk6 SLs are set to try and turn this around, weighing up to 140kg less than equivalent predecessors. That’s despite being 50mm longer and 57mm wider than before. Much of the weight loss comes from an aluminium bodyshell. It’s 89 per cent ally, with only the magnesium rear bulkhead and high-strength steel A-pillars not made of the lightweight material. Overall, it’s 110kg lighter than an equivalent steel structure, while nearly 20 per cent stronger. There’ll be two models from launch. The SL350 gets a new 3.5-litre V6 engine, which combines 302bhp and 273lb ft performance with 41.5mpg fuel economy. That’s a 30 per cent improvement on its predecessor’s efficiency, yet its 0-62mph sprint is also nearly half a second quicker than the outgoing SL350’s, at 5.9sec. The old SL500’s 5.5-litre V8 engine is replaced by a 4.7-litre V8, though power rises from 383 to 429bhp. Fuel economy rises by 22 per cent to 29.8mpg, while the 0-62mph time is 0.8sec quicker, at 4.6sec. There’s a host of technology said to improve the driving experience, too; steering knuckles and various axle components are constructed from aluminium, reducing unsprung masses, and there’s a speed-sensitive power steering system designed to boost both high-speed stability and agility, as well as make parking easier. Semi-active adjustable damping comes as standard, with a fully active ABC suspension system an option. High-tech trickery is peppered across the rest of the car, too; The roof is an electrically folding hard-top with optional Magic Sky Control – a glass sunroof panel that can be darkened at the touch of a button. Magic Vision Control is a highly exciting name for some moderately clever windscreen wipers. They spray washer fluid directly from the blades to avoid a puddle of liquid momentarily blocking your view through the glass, and they’re heated to avoid icy inconvenience in the winter. FrontBass harmonically seals each footwell to enable ‘concert hall ambience’ in the car but barely a peep of noise to pedestrians when the stereo’s in use. There’s also Merc’s plethora of safety technology, with Attention Assist (tiredness warnings) and Adaptive Brake (skid control and advanced braking tech) as standard and Pre-Safe (a rear-end collision-avoiding emergency brake system) on the options list. Styling-wise, it’s perhaps not the prettiest SL we’ve seen, but the exterior design boasts the lowest drag coefficient in the roadster class (Cd 0.27) and is said to offer decent roof-down, high-speed comfort levels. UK prices and specs will be confirmed next year. The new Mercedes-Benz SL will be unveiled at the 2012 Detroit motor show in January before going on sale in July. 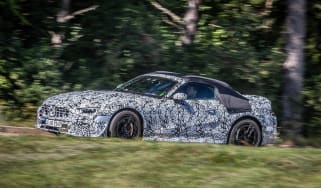