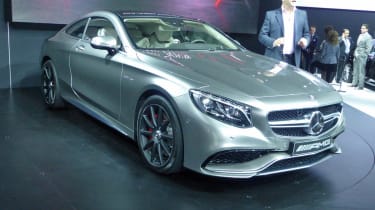 The Mercedes S63 AMG Coupe has made its debut at the 2014 New York motor show.

The hot version of the recently unveiled S-class Coupe is fitted with a new version of the company’s 5.5-litre twin-turbo V8, which now kicks out 577bhp and 663lb ft of torque. As previously tested in the S63 limousine, that’s 40bhp more than the CL 63 model it directly replaces, and thanks to improvements in efficiency, it produces significantly less CO2 at 237g/km.

As expected, the S63 AMG Coupe will feature a huge armory of technical features – headlined by the Magic Body Control system. This scans the road ahead, and adjusts the suspension stiffness for perfect body control, and for the first time on a production car, can also tilt the car into corners to the aid of both comfort and cornering ability. It also boasts a weight saving of 65kg over its predecessor, although that still means a weight figure befitting of the car’s size, at 2070kg. Weight saving comes thanks to forged alloy wheels, a small lithium-ion battery and the standard carbon ceramic brake set-up.

There’s a seven-speed automatic ‘Speedshift’ transmission, with the UK and other right-hand drive markets limited to the rear-wheel drive version. Europe and other LHD countries can opt for the slightly quicker 4Matic four-wheel drive equipped version. Top speed is electronically limited to 155mph, although the 0-62mph times of 3.9secs (in 4Matic form) and 4.3secs (rear-drive) give an idea of the car’s true performance.

Both versions are claimed to weight exactly the same at 2070kg, due to the rear-drive car’s more conventional (and lighter) suspension set-up. Mercedes-Benz will also offer an active exhaust, which remains quiet in ‘C’ (the most subdued of the car’s three driving modes) – opening up to let the 5.5-litre V8 sing in Sport and Manual mode.

Now that it's made its motor show debut, the S63 AMG Coupe is expected to go on sale towards that end of the year. Prices will start from around £120,000. And its styling - especially the rear treatment, with the number plate dropped from boot-lid to bumper, will pave the way for future sporty Mercedes styling. Among these cars will be the new Mercedes-AMG GT, the SLS AMG-replacing sports car set to rival the Porsche 911 and Jaguar F-type Coupe.