We drive the all-new Mercedes-Benz SL63 AMG roadster, with a twin-turbo V8 engine and lots of impressive technology 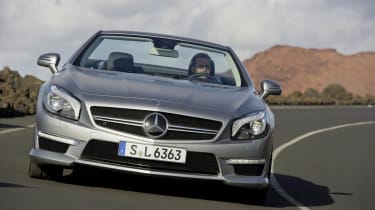 What is it? The new Mercedes-Benz SL63 AMG is the sportiest model in the SL range. With greater emphasis on the way it stops, steers and handles it is intended to be a sharper driving tool than the range topping V12-engined SL65 AMG. Thanks to the new SL platform’s weight savings it also promises to rival the performance of the considerably more expensive SLS AMG supercar. Technical highlights?

With this all-new SL Mercedes-Benz has made great strides in reducing weight. Okay so the previous SL had plenty of fat to shed, but that shouldn’t diminish the achievement of reducing vehicle weight by 125kg with the adoption of an all-aluminium bodyshell and a carbonfibre bootlid. Kerbweight remains hefty at 1845kg, but the 5.5-litre biturbo engine is more than man enough to throw this imposing machine down the road.

New tech fitted to this SL63 AMG includes electro-mechanical power steering with variable assistance and revised Active Body Control (ABC) sports suspension, with increased negative camber all-round for more responsive handling. The brakes have also been developed, with 390mm x 36mm front and 360mm x 26mm rear discs gripped by six-piston fixed and single-piston floating calipers respectively. There are three choices of electrohydraulically operated folding roof: painted, glass or panoramic vario-roof with the bizarrely named Magic Sky Control, which can switch between dark or light transparency at the flick of a switch.   What’s it like to drive?

Epic. There’s so much performance to call upon that it never fails to take your breath away. All that torque literally hurls you along the road as though you’ve been fired from a cannon, while the crackling, booming from the quad exhausts allays any fears of those turbos muffling AMG’s trademark soundtrack.

Despite the considerable weight saving when you extend the SL there’s no doubt you’re aware of its mass and momentum when steaming along a sinuous mountain road. There’s plenty of lateral grip to lean on, impressive traction and the standard brakes (carbon ceramics are an option) are well able to keep things under control, but every now and again a deceptive corner will remind you of the physics at work. Being an AMG it’ll smoke its tyres ‘til they pop should you find the right corner, but with so much torque on tap it can take some holding onto.

The ‘Speedshift’ MCT 7-speed transmission strikes a good balance between refinement and response. In the most aggressive mode it really snaps up and down the ratios, and while there’s still the occasional moment where it refuses a downshift rarely gets in the way of your enjoyment.

The weakest aspect of the car is the electro-mechanical power steering. It’s fine once you’ve got a decent amount of lock applied, but its initial response is a bit too sharp which coupled with a slightly disconnected feel means you almost always take corners in a number of bites, rather than one smooth input. It’s annoying rather than a deal-breaker, but it does put a small dent in the SL63’s driver appeal.

It doesn’t have the purity and agility of a Ferrari California, nor does it have the handsome style and mellow delivery of an Aston Martin Virage Volante. A Bentley V8 Continental GTC convertible is perhaps its closest rival for sheer depth of engineering and all-round owner appeal, but the SL63 has a unique ability to switch from boulevard cruiser to hill road hooligan with a flex of your right foot. It also has great character and a sense of completeness. In short it’s a magnificent car.

The AMG Performance Package increases peak power and torque outputs to 564bhp and 664lb ft. It also ups the electronic speed limiter’s sense of humour to 186mph and includes the fitment of a limited-slip differential and red brake calipers. Carbon ceramic brakes are a standalone option, as is the utterly stonking Bang & Olufsen hi-fi.