We drive the Mercedes SL63 AMG in the UK. How does it compare to its abundant roadster rivals? 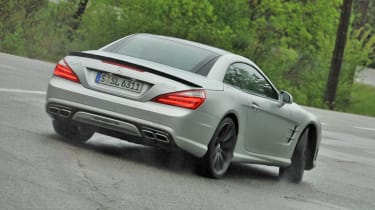 The Mercedes SL63 AMG, the twin-turbo V8-engined roadster whose ancestry includes the brutish supercharged SL55 AMG of the early 2000s. With an updated standard equipment list for 2013, it’s priced from £110,785.

The forced-induction 5.5-litre engine at the SL63’s heart is now an AMG staple, appearing in everything from the E63 saloon to the madcap G63 6x6. Here it’s mated to Merc’s seven-speed MCT automatic gearbox and is claimed to hustle the 1845kg SL from 0 to 62mph in 4.3sec on its way to the inevitable 155mph limiter.

The kerb weight is 125kg less than the previous-generation SL63, an all-aluminium bodyshell and carbonfibre bootlid (which can be gawped at up close when the folding metal roof is being stowed or closed) the main contributors.

Heroically fast, with a turn of pace that shortens your breath and widens your eyes even after frequent exposure. It still feels a big car, but the sheer brute force of the biturbo engine all but negates its flab. You’ll need a big road to stretch full-bore acceleration beyond third gear.

Despite such muscular performance, it’ll play the composed cruiser, too. Roof down and (optional) wind deflector up, you can sit at typical motorway speeds listening to the radio in plentiful comfort. Though while rivals’ folding roofs seem to operate at increasing speeds, the SL’s will only open or close at a standstill and it’s not the quickest mechanism we’ve used. Worth bearing in mind if the sky looks grey…

The SL63 handles impressively deftly, with the right combination of button presses on the transmission tunnel panel (gearbox to manual, ESP to Sport Handling mode, dampers in Comfort) creating a vivacious car rarely flummoxed by craggy British roads and with plenty of mechanical grip. Though with more torque than a Pagani Zonda 760RS, awakening the rear wheels is the work of a moment. Ultimately it’s a GT car with sporting character rather than an ultra-sharp sports car, and is better driven as such, but its feel-good factor is pretty damn high.

Plush convertible sports cars are actually rather abundant, with potential SL63 rivals including the Bentley Continental GTC, Ferrari California, Audi R8 Spyder, Porsche 911 Cabriolet and Aston Martin DB9 Volante. Perhaps the most compelling – especially as its starting price is a chunky £30,000 lower than the SL63’s – is the new Jaguar F-type V8 S. With 488bhp, it’s not quite as quick as the Merc, but you’re unlikely to care. It’s a cool, fun roadster and turns heads for the right reasons. Anything else I need to know?

Mercedes claims a combined 28.5mpg; mixed driving saw us average 22mpg, which is still commendable for the SL63’s size and sheer brute force. And getting carried away with the options is pretty easy – our test car topped £140,000, its spec highlights including Airscarf neck heating (£575), Magic Sky Control sunroof with light and dark transparency settings (£2610), the AMG Performance Package (which includes a 27bhp upgrade, carbonfibre boot spoiler and limited-slip differential – £12,530), and perhaps the most unrealistically priced of all, keyless go (£1605).