We examine the possibility of a true electric supercar, by driving one of the first you can actually buy - the Mercedes SLS AMG Electric drive 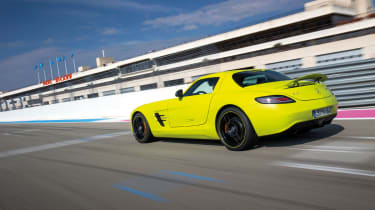 It’s finally happened. After the endless tedium of fantastical concept cars offering zero emissions and stunning (and completely unproven) performance, the fully type-approved electric supercar is upon us.

This is the Mercedes-Benz SLS AMG Coupe Electric Drive, the beginning of a new beginning. Or perhaps the beginning of the end, depending on your point of view. What’s undeniable is that this SLS is the most powerful AMG production car ever built. As AMG models don’t usually want for power, that fact is pretty arresting. Yet that’s just one of many surprises this car has in store.

Firstly, let me feed your cynicism. Yes, the Electric Drive has 740bhp and 737lb ft, but it also weighs 2110kg, which is 560kg more than the 622bhp SLS AMG Black Series (see Driven, page 28). The SLS ED costs around £360,000, depending upon the exchange rate (the car is only available in left-hand drive, but Mercedes will arrange to get one for you in the UK), compared to about £230,000 for the Black Series.

Then there’s the sticky subject of range. Driven to EC consumption cycle standards, the Electric Drive can cover 155 miles between charges. It takes three hours to replenish the batteries if charged through a special (optional) 22kW wall box, or 20 hours through a normal three-pin plug. Of course, should you want to feel the full force of 737lb ft, that figure plummets. And I mean really plummets. AMG admits that the ED can run two full laps of the Nürburgring but no more. Put like that, internal combustion looks safe for a while yet.

But to dismiss the Electric Drive on the basis of those numbers would be to miss the point. The SLS ED might be hamstrung by many of the existing EV disadvantages, but it also showcases some of the advantages of using electric motors in devastating and mind-scrambling fashion. That it does 155mph and 0-62mph in 3.9sec is by-the-by. That it might just be the best SLS you’ll ever drive is what’s really extraordinary…

So how exactly does it work? The basics are simple. The chassis has a new carbonfibre monocoque incorporated into the existing structure. It runs centrally from front to rear and houses and protects the battery pack, which consists of 12 modules, each containing 72 lithium-ion cells. The battery was developed by Mercedes AMG High Performance Powertrains at Brixworth in Northamptonshire, the same place that makes engines and KERS units for Hamilton and Rosberg. Up to 40 engineers worked on the SLS ED project just to develop this battery pack and many of them crossed over directly from F1 KERS duties.

The battery is said to have a working life of at least ten years, and it feeds four electric motors (weighing 45kg each) mounted above the monocoque, two in line with each axle. This means each wheel is powered individually to create a four-wheel-drive system with unique flexibility. Each wheel can be accelerated or electrically braked to constantly make the most of the tyres’ grip and manipulate the handling balance, a system called AMG Torque Dynamics.

My time in the SLS ED is limited to half a dozen laps of a short circuit in the north-west corner of Paul Ricard in France. It’s a tight, technical layout and there’s a chicane along the only real straight to further highlight the torque-vectoring systems. Just watching the Electric Drives circulating while I wait my turn is fascinating; there’s no engine noise at all, just the whoosh and shriek of tyres, which is deeply strange. But just as astonishing is the lack of wheelspin and this SLS’s balance: front tyres pinned to the apex and the rear axle hung out at a fixed angle of attack. If Sébastien Loeb drove an SLS – any SLS – this is how you’d imagine it would look. Clinical and slightly awe-inspiring.

So you jump into the ED and it feels like any other SLS. You sit low, huge bonnet outstretched and mostly out of sight, rear wheels just behind your hips. There’s an engineer in the passenger seat who explains the car’s different modes: Comfort, Sport and Sport Plus. We’ll start in Comfort, where you only get 60 per cent of the available power, a smooth-edged throttle response and a layer of foolproof understeer. Then, a lap or so in, we’ll wind it straight up to Sport Plus and sneakily turn off the ESP, too. The full might of the electric motors is unmissable, but I want to know what happens when you bullishly charge beyond the tyres’ limits with all that clever and infinitely adjustable torque-vectoring tech. The engineer is happy to indulge me and so I hit the Start/Stop button.

With a powering-up crescendo that wouldn’t be out of place in an episode of Star Trek, the car announces that it’s ready. AMG has worked hard on the SLS’s ‘eSound’ system, with musicians and engineers helping to create a soundtrack that isn’t just clonking dampers and the thrum of fat tyres. It’s played through the stereo and somehow sounds just right. I don’t even think about the noise and will later barely recollect it as anything more than a subtle but hard-edged whoosh with a hint of sci-fi distortion layered on top. In fact more than one journalist will hurriedly rush back to the car just before we leave for the airport, having ‘forgotten to listen to the sound it makes’. Myself included. I guess there can be no higher form of flattery.

So you roll away effortlessly and almost silently. Immediately the car feels cohesive and seriously powerful. In Comfort mode the ED offers just that, and while deeply impressive, it’s also thoroughly anodyne. But it’s transformed the moment the engineer twists the rotary dial to Sport Plus: it’s like every sinew in the car is pulled tight and the response and performance ramps up. Suddenly it feels like a supercar.

The sheer scale of the performance and the way it’s delivered in an unbroken surge is extraordinary, and you quickly become accustomed to it. What you don’t get used to is the ED’s grip and the way it tackles the track. You can use the throttle much more aggressively out of tighter turns than you can in the Black Series and you can lean on typical four-wheel-drive traction.

You’d expect as much, but what you might not expect is the way this 2110kg machine changes direction, its resistance to understeer and the brilliance of AMG Torque Dynamics. The system revels in manipulating the ED into glorious slides, rear wheels rotating slightly faster than the fronts and driving them hard into the apex. You have suddenly become Loeb, capable of balancing a two-ton, 740bhp car in millimetre-perfect four-wheel drifts.

Inevitably you begin to experiment by trail braking or even going for the full lift-and-lob turn-in technique to provoke the car. Do so and it will happily take on a more dramatic angle. Fight your instinct for opposite lock, though, because the system’s flexibility comes to the fore again, magically pulling you out of slides in a manner reminiscent of a World Rally Car with active diffs. If you do drive it as you would a rear-drive SLS and try to actively correct oversteer, the system feels less natural and the tyres regain grip with a nasty grab. Only then does the ED feel all of its two tons. So you adapt and learn to enjoy its unique chassis behaviour and the freedom to exploit 737lb ft at will.

All too soon, I’m asked to cool the car down and cruise back to the makeshift paddock. Oddly, that lap makes me feel like my brain is struggling to compute what’s happened. The ED really is a surreal, highly impressive experience and the intelligent four-wheel-drive system is an eye-opener. The dream of active control of each wheel is alive in this car and it uses the technology to startling effect. Perhaps electric cars will open up a whole new level of agility, stability and excitement…

Of course, I’ve barely scratched the surface of the SLS Electric Drive’s technology. And I certainly haven’t unlocked its long-term or real-world potential. Only an in-depth test on roads we know and love, in varied traffic, varied weather and, crucially, involving the inconvenience of charging and range anxiety will really determine how the SLS ED stacks up. But one thing I can tell you is that the electric car in its most extreme form is a lot of fun and promises much for the future.

Long live the revolution? Perhaps. That’s as far as I’ll go for now. I’m off to bang some rocks together to start a fire and re-indoctrinate myself against the evils of EVs…