The one-off Mercedes-Benz 1000 road car, capable of 268mph, has been consigned to an auction. Pictures and details here 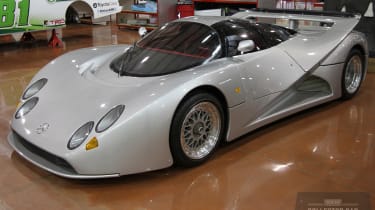 US-based auction house, RKMCCA, has released details of a number of rare and exotic cars, which will be sold off during the company’s next sale on 31 October to 3 November. One of the most exciting of the selection is a one-off, 268mph road car built in 1995.

The Lotec Mercedes C1000 was reportedly built for a wealthy UAE businessman, who wanted to own the fastest car in the world. After almost five years of development by the small German engineering company, and a build cost of $3.5m, the Mercedes Lotec C1000 was born.

It is equipped with a twin turbocharged 5.6-litre V8 engine, which produced somewhere in the region of 1000bhp, coupled with a six-speed manual Hewland gearbox. The body is made from carbon fibre, meaning the whole car weighs 1080kg.

The North Carolina auction also features more muscle cars than you can shake a stick at, among other supercar rarities such as: a Bugatti Veyron; James Hunt’s McLaren M26 race car; a number of NASCAR racers; a Lexus LFA and even more.