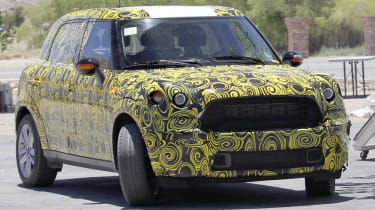 The Mini Crossman, previously referred to internally as the 'Colorado', will bring the brand firmly into new territory. What will likely be called the R58 within BMW from here on out, the Crossman is obviously riding higher than current Mini models, and have All Wheel Drive, making it a potential choice for off-roaders. With these new capabilities, Mini plans to expand its customer base to include young men who want something a little more 'masculine' than the current models.

Initial response to the new name has made some wonder if Mini lost its creative edge. Likewise, one potential downside to the company releasing a crossover is if they will end up alienating the fan base that has rallied around the small car brand since the release of the Cooper.

This new vehicle will also mark the first time a Mini is assembled outside the UK. Austrian manufacturer Magna Steyr will build the car for Mini, which is rapidly running out of space at its current facility. The Mini Crossman is scheduled for release in 2010. Segler says there are currently no plans for a fifth Mini model.