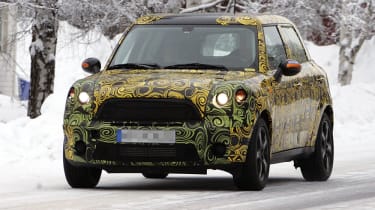 The latest new-age Mini has been out testing again, and it’s nearly ready. The Crossman SUV is starting to feel like one of the most spied cars of recent times, with many a prototype snapped in the last couple of years.

While it wears a pretty heavy disguise, it’s possible to spot changes from the wilder Crossover Concept seen at the Paris motor show. The mad back doors have been lost, for one, with the car becoming a slightly more humble five door.

The rear is set to be a hatchback, too, with the slightly unloved rear doors from the Clubman denied an appearance on the Crossman. That’s despite appearances – look very closely at the rear shots and it’s possible to tell the door handles are fake and the black line down the middle of the screen is just tape.

The car will be built at Magna Steyr in Austria, making it the first non-UK built Mini. It’ll be all-wheel drive and is likely to come in the usual Cooper and Cooper S specs, with 118bhp 1.6 and 172bhp 1.6 turbo engines respectively. The 108bhp 1.6 diesel from the hatch is likely to be a strong seller in AWD guise too. Despite the Clubman appearing in John Cooper Works spec, it’s unlikely the Crossman will.

The production car should be on sale by 2010, with the production version possibly making an appearance at the Frankfurt motor show this September. Keep your eyes on evo.co.uk for the latest.